Know all men by these presents That I Peter Shey of Falmouth in the County of Hants and Province of Nova Scotia, Sheriff of said Hants County  In Virtue of my office, and agreeable to the Laws of this Province, and for and in consideration of the sum of Twenty One Pounds Currency of said Province to me in had paid by Edward Barker of Falmouth aforesaid, I have this Day sold at public auction, and made over unto the said Edward Barker Two pieces or parcells of Land described in the Allotment or division of Lands in the Township of Falmouth by lots number Two & Three situate situate and lying on the north side of the River Cacaquit or halfway river (so called) and are bounded Southerly by lot number four, on the West by the line twixt the Township of Falmouth and Horton, on the north by lot number one, and on the East by the River Cacaquit, and a part of a Ten acre marsh lot, containing in the whole Two hundred acres more or less, which Two hundred acres were taken to satisfy and Execution at the Suit of Mrs Martha Whitfield, against the Estate of the late Henry Denny Denson Esq. of said Falmouth Deceased, the time allowed by Law for redemption of the same being Expired, to have & to hold the said Two hundred acres of Upland with the appurtenances theron and thereto appertaining unto the said Edward Barker his Heirs and Assigns for ever, In Witness whereof I have hereunto set my hand and seal at Falmouth in the Eighteenth day of June in the Twenty ninth year of the Reign of our Sovereign Lord George the Third King  ec ec ec and in the year of our Lord one thousand seven hundred and Eighty nine. 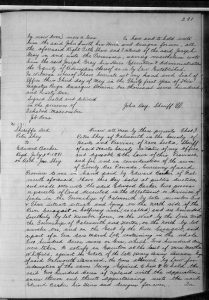 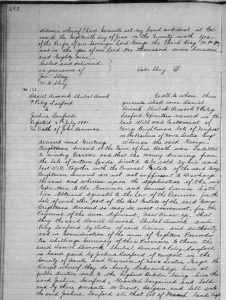