In the early 1820s Ezra Churchill (1804-1874), a young man from Yarmouth, Nova Scotia, arrived in what was known as the Halfway River settlement, Falmouth District, Hants County, on the west shore of the Avon River estuary. The Halfway River was so-named because it was halfway between the older communities of Grand Pré and Windsor.

Ezra Churchill began to build ships c. 1840 on the bank of the Halfway River. By 1850 he had established the Churchill Shipyard on the Avon River estuary immediately north of the mouth of the Halfway River. The nearby forest and the vertical range of Fundy tides at that site were ideal for building, launching, and carrying out maintenance on the more than 80 wooden sailing vessels (barques, brigs, schooners, and full-rigged ships) that saw service in the Churchill fleet during the 19th century. Shipyards existed at several other communities around Minas Basin, but the Churchill Shipyard was one of the most active, and the commerce carried by Churchill vessels made Ezra and his family wealthy.

Hants County was established in 1781. Even in 1850 commercial traffic in the area was primarily by sea. Overland travel relied on horses, and the roads were rough. With the impact that Churchill ships were having on the Hants County economy in the 1850s, on Ezra’s suggestion, the name “Halfway River settlement, Falmouth District” was changed to Hantsport, still the only community on Earth so-named.

Early in that decade Ezra had a grand home built for his family on a high headland overlooking his shipyard. Surrounded on two sides by the tidal waters of the Halfway River, and on a third side by his shipyard on the Avon River estuary, the Shipyard House was three stories high, with 17 rooms, 5 hallways, and two verandahs. Its mid-basement support post was the bottom end off a mast for one of the Churchill ships, half a metre in diameter.

In 1855, Ezra was elected as the Hants North member of the Nova Scotia Legislative Assembly in Halifax. That year his eldest son, George Washington Churchill (1835-1906), took over management of the shipyard and ran it successfully for another four decades.

The Churchill Shipyard and the Shipyard House were at the foot of Prince Street, so-named in 1860 when the Prince of Wales, later King Edward VII, came from Halifax to Windsor by train, by stagecoach to Hantsport and down the street to the Churchill Shipyard. (The railway from Halifax had reached Windsor in 1858, but not Hantsport until 1869.) There the Prince boarded the Royal Navy paddle-wheel sloop, H.M.S. Styx that took him to Saint John, New Brunswick. In the “Illustrated London News” of September 1, 1860 is a wood engraving showing the Styx leaving Hantsport. In the background is a view of the Churchill Shipyard, and on the hill to the upper left of the shipyard is the Shipyard House.

Today’s Hantsport Memorial Community Centre house was the home of Ezra’s younger son, John Wiley Churchill (1840-1915). Ezra had it built by his ship carpenters as a wedding present for John in 1860. Ezra sold the Shipyard House to his son George in 1866 when he moved to Windsor’s Clifton House. Four years after Confederation, in 1871 Ezra was appointed to the Senate in Ottawa.

During the two decades leading up to the First World War, steam-driven iron ships brought an end to the age of sail, and the economy of Hantsport was in decline. In less than 30 years after George’s death in 1906, the wealth that Ezra and George had amassed was gone. In 1909 George’s son Randolph (1887-1941) bought the Shipyard House property, and moved in with his family. A few years later he served in the First World War in Europe. Randolph and his wife, Elsie, divorced, with Elsie retaining ownership of the Shipyard House.

For income, in the 1920s Elsie had seven rental cottages built on the extensive grounds, and with the Shipyard House used as a summer hotel, she advertised for tourists, a venture that collapsed with the Great Depression. On July 13, 1935, the contents of the Shipyard House were sold at public auction, and the house listed for sale.

The Shipyard House had been in the Churchill family for approximately 85 years. During the next 85 years the fate of the Shipyard House involved a man who had completed his formal education with Grade 6 at the White Rock School in the Gaspereau Valley, Roy A. Jodrey (1888-1973). Jodrey was the son of a sawmill operator and carpenter in Gaspereau, Joseph P. Jodrey and his wife Annie (Harrington) Jodrey. 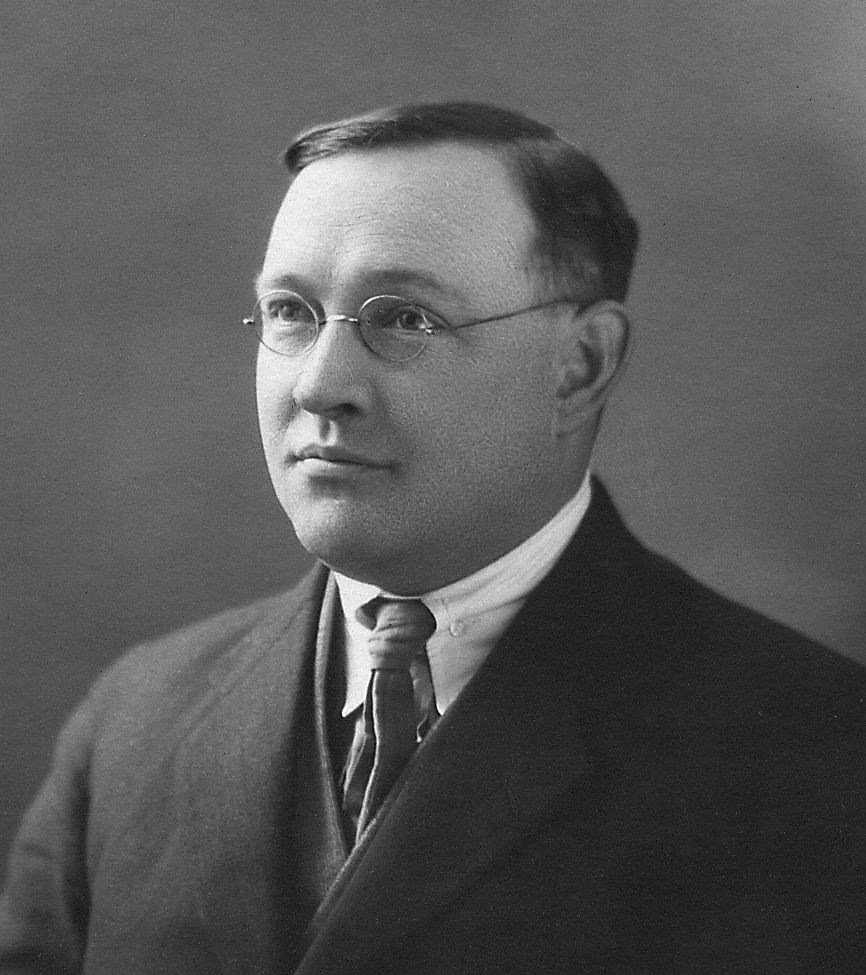 Roy Jodrey’s faith in his own ability and his drive to work hard were remarkable. At age 21, in 1910 on his own initiative he crossed the Atlantic on the White Star Line’s R.M.S. Adriatic to establish business contacts in England for shipping apples from orchards in the Gaspereau Valley. By age 31 he and his partner, the legendary contractor Charles H. Wright, had constructed a hydroelectric dam on the Gaspereau River near White Rock, complete with a pulp mill. In 1920 their Gaspereau River Light, Heat and Power Company brought electricity to the Gaspereau Valley and several communities in the eastern Annapolis Valley. From the wharf in Port Williams, Jodrey and Wright began shipping tons of groundwood pulp to the United States.

During his 30s Jodrey, along with his partners, Wright and William H. Chase (all three men were then residents of Wolfville), incorporated the Avon River Power Company, built two hydroelectric dams on the south branch of the Avon River, and began to develop hydroelectric power on the Black River near White Rock.

In 1927 Jodrey incorporated the Minas Basin Pulp & Paper Mills Company for construction of a second, larger pulp mill in Hantsport. The vacant Churchill Shipyard provided space for the mill and an ideal shipping port, and the Halfway River a water supply for the mill. In 1928 Wright built the pulp mill, a storage dam on the Halfway River, and a pipeline to the Hantsport waterfront. The first shipment of ground wood pulp left Hantsport for the U.S.A. in April 1929 on the S.S. Ulva.

The future looked bright that spring, but within a few months everything changed. On July 16, 1929 Jodrey’s partner Charlie Wright was killed in a train-car collision in Falmouth. Beginning that autumn most of what Jodrey had accumulated vanished in the financial collapse of the Great Depression.

By the bottom of the Great Depression in early 1934, with half of his life behind him, his pulp mill unable to afford the cost of electricity to keep its grinders running year round, Jodrey himself was in debt. When many men would have given up, Jodrey managed to save his Hantsport mill from closure, and Hantsport from a second economic collapse, by doing the selling job of his life in Montreal. He obtained the financial backing and the engineering assistance to construct a pipeline and a hydroelectric plant on the St. Croix River plus a 20 km transmission line to Hantsport to supply energy to his struggling pulp mill. Saint Croix electricity arrived in Hantsport in January 1935, the year that his new Canadian Keyes Fibre (CKF) factory began producing paper plates.

By then he was spending most of his time in Hantsport, commuting from his home in Wolfville. It made sense to sell his Wolfville home (today’s Landmark East School), and move his family to Hantsport. The Shipyard House was across the street from his office at Minas Basin Pulp & Power Company (renamed two years earlier with the anticipated arrival of St. Croix electrical power), so the company bought the Shipyard House. On October 16, 1936 the Jodrey family moved in as rental tenants. Steam generated from burning waste bark in the pulp mill began to heat the Shipyard House, and St. Croix electricity began to power its lights and kitchen stove.

After the end of the Second World War the CKF factory began to expand, occupying more of the land east of the house. In 1950 a large storage shed for a new paperboard plant was built on the west side of the Shipyard House, and during that decade most of the hill on its east side was flattened to accommodate further expansions of CKF. In 1964 the remaining elm, oak, and black locust trees were cut down, the main entrance, conservatory and two-story verandah on the east side of the house removed, and the portion of the Halfway River estuary below the Shipyard House (that had been transformed into an isolated bay by the arrival of the railroad in 1869) filled in to make room for the ever-expanding CKF factory.

Roy Jodrey departed this life in 1973. His wife of 62 years, Isabel Coldwell of Melanson, lived on until her death in her 101st year, in 1988. She had been the lady in charge of the Shipyard House for over half a century. In full appreciation of the economic benefits her husband brought to Hantsport and the surrounding communities, Isabel never complained about the removal of the verandahs and the conservatory, or the loss of the beautiful grounds with its trees and flower gardens, or about the increasing noise and subtle vibration 24/7 from the CKF factory.

From Isabel’s departure in 1988 until 2021, other than providing accommodation for visitors on company business, and occasional social events for company employees or the extended Jodrey family, the Shipyard House was vacant.

With its lovely grounds long gone, its most striking external architectural features removed decades earlier, some of its interior features “updated” in recent years, hemmed in by industrial buildings, and located behind a security gate during its last 20 years, by 2021 its historical value for Hantsport was greatly compromised. Transport to another site was considered, but the grand old home was too large and fragile to be moved. No longer having any reasonable role, and with the land it occupied for twice 85 years being needed for further expansion of the CKF factory, regrettably the Shipyard House was demolished in December 2021.

Dr. Roy Bishop, Emeritus Professor of Physics at Acadia University, lived in the Shipyard House with his siblings, parents and grandparents from age 2 to 22 (1941-1961). In his teens he had many voyages around the upper Bay of Fundy on the Bijo, a diesel-powered tug that brought pulpwood to Hantsport. His closest contact with the age of sail was an 8-day sail from Halifax to Bermuda on the Australian replica of James Cook’s 18th-century Barque Endeavour during its first circumnavigation in 1998/99.