In 1960 the women of Bishopville met together and formed the Daisy Club. At the first meeting in February the following officers were elected: President, Georgia Sheffield; Treasurer, Ida Frizzle, and Secretary, Sadie Payzant.

Over the years they made quilts, did knitting, had card parties, dances, and pie sales to raise money. (1) 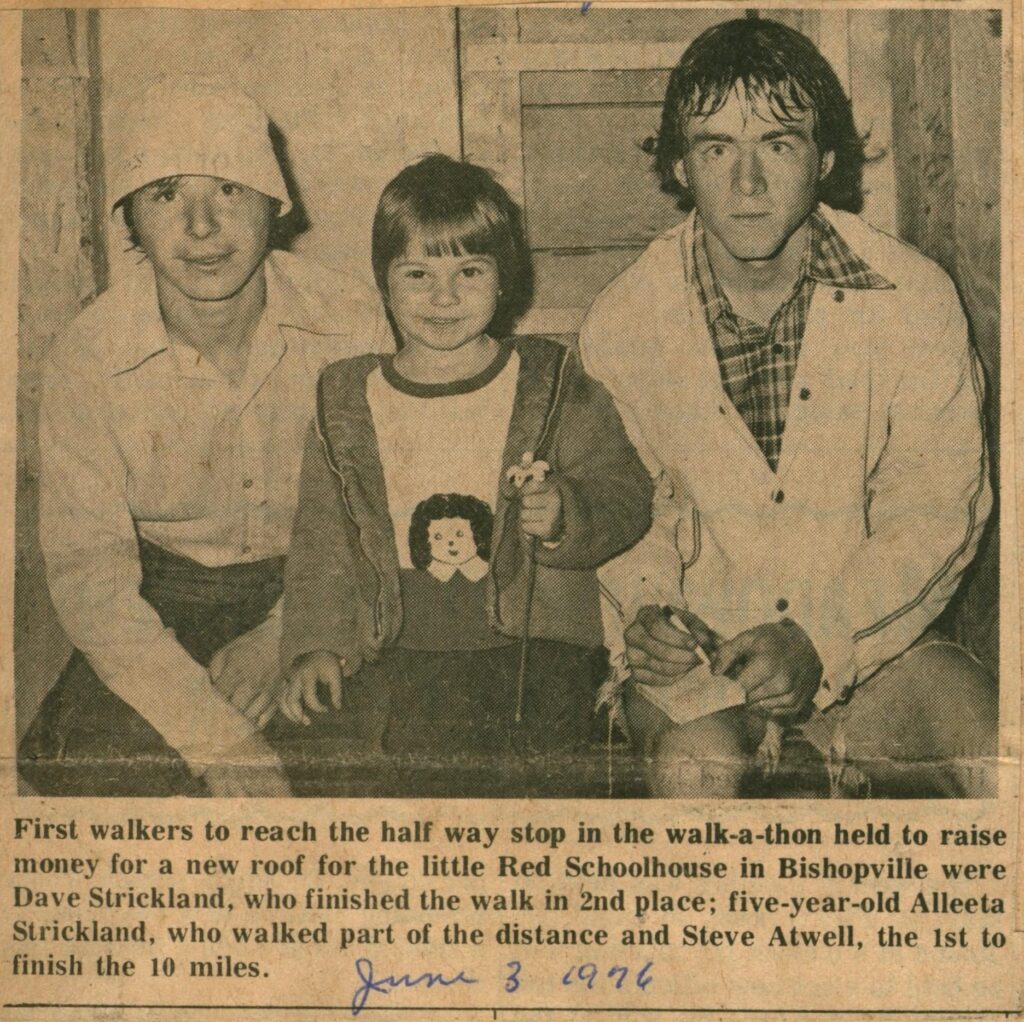 They bought the school for a Community hall. Over the years they have been there to help those who were ill or in need.

The Club received a legacy from the Estate of the Late Hedley Bishop. This was used for church renovations, cemetery fence, etc.

An old-fashioned celebration was held at the church on the afternoon of Sunday, 5 July 2009.

“The oldest living resident of the community, Sadie (Beckwith) Payzant, now in her 102nd year, remembers her mother Annabelle (Andrew) Beckwith talking about helping by pounding nails. Fact is the women of the village all helped in one way or another holding teas and so on to raise funds. Labour and money were donated.

Within the last 50 or so years the Bishopville Daisy Club, assisted by volunteers raising funds, put the church on a permanent foundation, painted and renewed the old building. The late Clyde Payzant and his mother Sadie were janitors, wood providers, lamp and stove cleaners and so on.

The pump organ that stood behind the pulpit in one corner was played for a time by Beatrice Green. After that Ida (Beckwith) Frizzle, now a resident of Dykeland Lodge, Windsor, shared her natural talent by playing the beloved organ for more than 50 years.

The anniversary celebration will be an old-fashioned homecoming picnic. Lifelong resident of Bishopville and one of the trustees, Pearl Myles, says, “yes, there will be a horse and wagon.”

There will be plenty of parking courtesy of Payzant farm. Church trustees and residents of the community are hoping to make the occasion memorable befitting the Bishopville Church. Come one come all. Bring a picnic basket and chair, tea and coffee will be provided. The whole shebang starts at 4 p.m. with an outdoor gospel concert featuring a number of local singers and groups. This will run right along into the first church service of the summer at 7 p.m.” (5)

PAYZANT, Sadie Belle (Beckwith) – 102, lifelong resident of Bishopville, passed away peacefully at home on Tuesday, August 17, 2010. Born on November 19, 1907, in Bishopville, she was the daughter of the late Andrew and Annabelle (Riley) Beckwith. After completing high school in Hantsport, she found employment as a “Nanny” and housemaid in Windsor for five years. Sadie moved to Boston, Mass. for the next four years, where she continued working in her chosen profession. In 1929 with the “Great Depression” looming Allen Payzant made his way to Boston and convinced Sadie to return to Nova Scotia with him to become his bride. Sadie and Allen purchased a farm in Bishopville where they worked side by side clearing land, growing crops and raising livestock to sustain their new family. Like their hearts, the door of their house was always open, providing a home for family, school teachers and hired help. Sadie was often called upon to mother babies, toddlers and youngsters in addition to raising her own boys. Increasingly, Sadie became famous for her award winning pies, bread and rolls, preserves and fancy work in local exhibitions. Her outstanding quilts were highly sought after, as every thread was painstakingly stitched by her talented hands. She was always proud to display her many ribbons and awards which were won by her at local county exhibitions throughout the province. Sadie was a founding member of the Bishopville Daisy Club. This club became the hub of activity when it purchased the former “Little Red Schoolhouse” and was renovated into the community hall. Sadie was instrumental in organizing a committee to restore the Bishopville Cemetery and she worked diligently to keep the doors to the Bishopville Church open. Sadie was a lifetime member of the Hantsport Baptist Church, where she sat on many committees over the years. She was also a member of the Hantsport Elders Project and has always taken a heartfelt interest in the welfare of others. Above all else, her love and devotion to her family always shone through. (6)