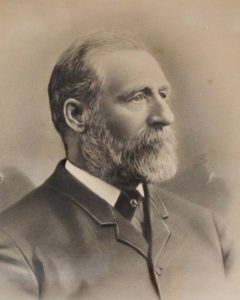 On Wednesday last, the 27th ult., Mr. J.B. North who has been an invalid by reason of paralysis, for some eight years, passed peacefully to his reward at the age of 81 years.

The deceased was a native of Cornwallis, Kings County, where he grew to manhood and married a Miss Ells, a sister of the late David and Nathan Ells.

Mr. and Mrs. North came to Hantsport about 1855, and he commenced business as a general dealer and shipbuilder. He bought the house now known as the Campbell house, built a store where now stands the Evangeline house, on the corner of Avon and William Street. After coming to Hantsport he first built vessels in Mr. Churchill’s yard, where he launched at least three, the “Herald,” the “Persis,” and the “Augusta C. Small.” About the year 1863 he bought property over the line on the river front, built a house and commenced building vessels in his new yard.

Here he built vessels of all sizes from a small schooner up to a nearly two thousand ton ship, the largest one being the unfortunate ship “Loodiana” which he built for the Messrs. B. Smith and Sons, Windsor, and which was burned at sea, after running but a short time. The number of vessels built by Mr. North we have not learned, they probably number thirty or over. Before ceasing work he took into partnership his two sons David E. and J.T. and the firm name afterward was J.B. North and sons.

After quitting wooden vessel building, the firm became largely interested financially in the Battle line of Steamers, Mr. David E. North going to the Clyde to superintend their construction, and in this line of steamers the firm are still large owners. The Messrs. North have always continued in merchandise, and have got a large general store. About the time Mr. North was doing his shipbuilding, he built a fine residence for himself on the Main Street overlooking the Avon River, with Blomidon in the distance and here on his veranda during the evening of life he loved to watch the vessels passing to and fro.

Mr. North had no ambition for public life, but did represent his County in the local Legislature for a term of four years. He was always a Conservative in politics but not a partisan. Deceased was a regular attendant, when active, of the Methodist Church and gave liberally to that body.

He was a very charitable man in a quiet way, and many a poor man has had occasion to bless him.

He is gone but his memory will long be cherished by those who knew him. His word was his bond, and his example of an honest, energetic life is worthy of imitation.

All were present at the funeral except Mrs. Patterson. Mr. Eaton the son-in-law, was also present. The funeral was on Saturday p.m. the 2nd inst., and although a heavy rain prevailed, a large number of men attended and followed the remains to River Bank Cemetery a distance of a mile through the driving storm, showing their last act of respect for an old friend. 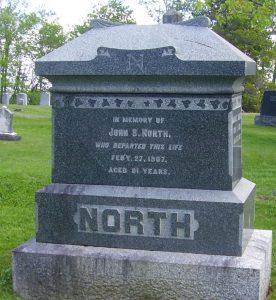 The funeral was in charge of Undertaker Borden the services were conducted by Rev. F.E. Barrett, assisted by Rev. J.M. Fisher and Rev. J.G. Bigney all of the Methodist church and Rev. W.H. Jenkins of the Baptist Church.

The singing was by a mixed Choir from the Methodist and Baptist Churches. The order of service, Hymn No. 810, “Oh God our help in ages past”, etc; Prayer by Rev. F.E. Barrett, Scripture reading by Rev. J.M. Fisher, Hymn 848 “Why should we start and fear to die” etc. Short address by Rev. F.E. Barrett, Prayer by Rev. J.G. Bigney, Hymn 784 “Abide with me” etc, closing prayers by Rev. W.H. Jenkins.