– HANTSPORT RAIL YARD TO BE EXTENDED –

HANTSPORT, May 9, 1944 —The new $15,000 railway station built by the Dominion Atlantic Railway at Hantsport was recently completed and is now in use. The new station, complete less than ten months after the old one was destroyed by fire last June, is an attractive one-storey building, approximately 75 feet by 22 feet, modern in every respect and equipped with hot water heating. The building contains a comfortable general waiting room, office, express and baggage room, and a freight shed. Off the waiting room are two well-equipped wash rooms, one of them large enough to be used as a women’s rest room.

The outside walls, 12 feet high, resting on a three-foot concrete base, are built of shale facing brick, and the roof is finished with blue-black asphalt shingles. The building is surrounded on all four sides by a platform partly sheltered by the projecting canopy roof which extends about 20 feet at either end making the total length of the structure around 115 feet. The platform is now some 350 feet long.

The plaster walls of the interior are painted a dark buff for about two-thirds of their height as far as the moulding above which the color is cream with a white ceiling. The woodwork is brown. A niche has been left in a prominent place on the east wall of the waiting room which will eventually be filled by a glass case containing a ship’s model presented by C. B. (Ben) Newcombe of Grand Rapids, Mich., formerly of Hantsport, and built by T. A. Folker of Hantsport. This model is to be a reproduction of one of the many wooden ships built at Hantsport in the old days.

Construction by a private contractor was under the direction of the D. A. R. Company Engineer, J. J. Richardson, Kentville. According to a statement issued by the company’s Kentville office, it is proposed also to carry out “extensive alterations and extensions to the yard tracks at Hantsport during the coming season to take care of the increased business being handled at this station”.

The new station, like its two predecessors, houses the only telegraph office in town. It is not generally known, however, that years ago before the railway came to Hantsport a telegraph office was situated at the other end of the town on Main Street.

This first telegraph office in Hantsport was in charge of a woman, a former school teacher, Mrs. Margaret Mitchner McCollough, who was succeeded by a 16-year-old girl, Miss Mary Barker (the late Mrs. George H. Yeaton of Hantsport). The paper shortage then, it seems, was even more acute than it is now and a shipyard owner of that time used to write his messages on chips of wood which he found lying around the yard. There are people living in Hantsport today who remember seeing these “wooden telegrams” piled up in a corner of the office awaiting the inspector’s visit.

This is one of many interesting stories recalled by some of the oldest residents of the town who remember also the original station which more than 60 years ago was moved from its site to make way for the larger wooden frame building that was burned to the ground in the early hours of June 23, 1943.

The Hantsport Railway Station is located on Station Street in Hantsport, Nova Scotia. This railway station, built in 1944, is in the middle of a still active rail yard, with tracks running on both sides of the building. The building and property are included in the provincial designation.

The Hantsport Railway Station is valued because it is one of the very few heritage stations left in the province still used as a railway station and because it is a visible symbol of Nova Scotian railway history.

The first train of the Windsor and Annapolis Railway passed through Hantsport on Christmas Day, 1869. There has been continuous rail service since that date, mainly by the Dominion Atlantic Railway, owned in 1912 by the Canadian Pacific Railway Company. In recent years, the need for a rail link for the export of gypsum has been a mainstay for the railway. In 1994, the Windsor and Hantsport Railway Company purchased the tracks and stations needed for a short haul railway operation from Canadian Pacific.

The original station on this site was built around 1893 and was replaced shortly before World War I. This station then burned in 1943. Probably because of the wartime need for gypsum, the Dominion Atlantic Railway rebuilt the station immediately. The new station, the one standing today, opened in 1944. The design seemed to have originated in the desire to replicate, in brick, aspects of its wooden predecessor.

Constructed of large brick typical of the era, the Hantsport Railway Station nevertheless incorporates many exterior details reminiscent of the 1920s Craftsmen period. These include the roof profile, the fake half-timbering and rough cast of gables, and the heavy brackets supporting the widely overhanging roof. Another architectural element of note is the chimney, built with a significant batter (taper).

This little station fits well into its predominantly industrial environment, with a sawmill on one side and warehouses on the other. Its integrity remains intact, and it is probably one of the oldest unaltered structures on the entire rail line.

Character-defining elements of the Hantsport Railway Station as a traditional class 4 station include:

– brick construction;
– flattened hip roof with brackets supported by extended eaves;
– half-timbered gable over the station agent’s window;
– tapered chimney stack;
– prominent location within the industrial district of the town of Hantsport and along a still active rail line.

Sadly, after recently being vandalized (Summer 2019), the windows of the Hantsport Railway Station have been boarded up and painted. The Heritage Designation plaque visible in the 2007 front entrance photo has been missing for some time. 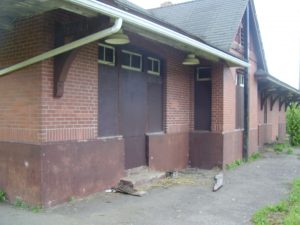