The estate of the late Grace Burgess Oulton (1885-1956), wife of former Hantsport school teacher and principal Millage Alfred Oulton (1881-1947), was left to the Hantsport Public School Board to set up a library to be known as the Millage Oulton Memorial Library.

In the Court of Probate for Hants County on 17 March 1957 the estate was settled. D. M. Frittenburg, Mr. McDade, and B. Alexander were in attendance representing the School Board.

It was decided by the board that an independent library could not serve the community as well as a branch of the Annapolis Valley Regional Library.

The Library was housed at first in the Community Centre House. Two rooms on the second floor were redecorated and reading tables and chairs were installed. One room contained children’s books and the other books for adult readers. Miss Elmira Borden served as librarian. 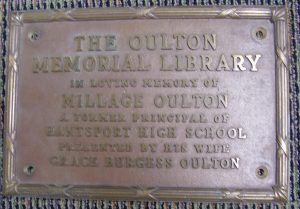 The Library opened in December 1957, and total registered membership grew from 335 to 500 borrowers after two years of operation. The Library moved to a new home in the new school building in 1961.

Due to ongoing renovations in the Hantsport School, the Hantsport Library was asked to leave their location by August 2015. In July 2013, in order to facilitate the search of the new place and the further movement of the library, Hantsport Town Council formed the Library Advisory Committee (LAC).

On Oct. 7, 2013 LAC had its first meeting. Represented on the committee were Hantsport’s Town Council, the Municipal Councils of West Hants and Kings County, Glooscap First Nation, the Friends of the Hantsport Public Library (FHPL), Annapolis Valley Regional Library (AVRL) and the citizenry of Hantsport. Later it was decided that the renovation of the old town-owned Royal Canadian Legion building at 10 Main St. would be the best solution.

Financial issues
After finalizing all the details on the move, the Hantsport Library faced another issue – finances. The prior research and consulting demonstrated that the renovations would cost approximately $175,000. The cost would cover changes to satisfy the building codes, the requirements of AVRL and to make the building wheelchair accessible.

On April 1, 2014 Town Council passed a motion to support the proposal to renovate the Legion to house the Library with the stipulation that the money must be raised prior to starting the renovation. Save Hantsport Public Library (SHPL) fundraising group was formed as a sub-committee of LAC. SHPL were volunteers from the community determined to raise the necessary funds to renovate the Legion and save the Hantsport Public Library.

The Jodrey Family
On 15 Dec. 2014, Hantsport Library Committee and Hantsport Town Council were pleased to announce that members of the family of the late Isabel and Roy Jodrey had donated $100,000 toward the Hantsport Library Relocation and Renovation project.

The Jodrey family has always been very generous to Hantsport by supporting community groups and organizations, such as the Hantsport Memorial Community Centre. The donation went a long way toward ensuring that the library project would go ahead and become an excellent asset for the Hantsport community for generations to come. With this in mind, the Town Council unanimously agreed to name the new library the Isabel and Roy Jodrey Memorial Library.

And the happy end
With the help of responsible Hantsport community members, the Hantsport Public Library was not only saved but also relocated to a bigger and nicer place that allows us to serve more people, host better events, offer a revitalized book collection and, hopefully, help those who once shared his or her help with it. 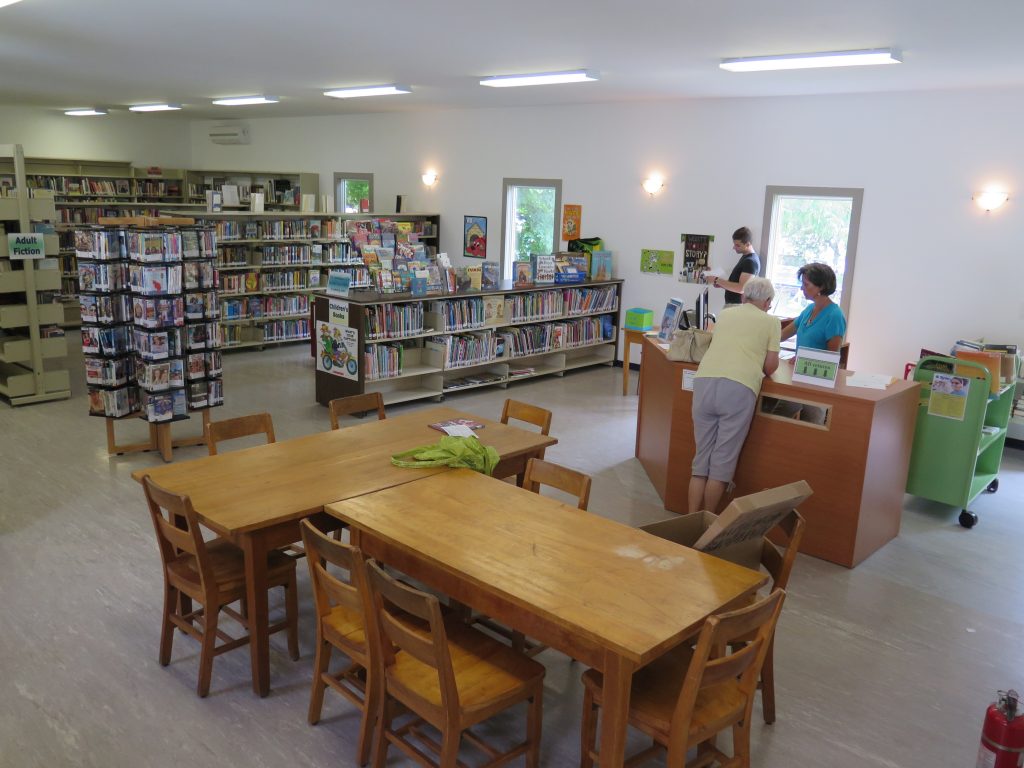 On June 27, 2015 an important event for the Hantsport community took place – the doors of the new Isabel and Roy Jodrey Memorial Library were opened. It is a great pleasure to see that the Hantsport Library has turned another page which promises to be colourful.