“Tea Room Artists” was the name of a group of artists from Hantsport and the surrounding area who met during the winter months to enjoy the leisure art of painting. Although amateurs their paintings do have a professional flair.

This photograph of the mural done by the group in 1995, on the IGA building on Main Street in Hantsport, depicts the era of ship building and sailing in Hantsport. Hantsport was incorporated on April 25, 1895.

Painting classes were held in the evenings during the fall and winter at the Hantsport school as part of the Adult Education Program since the 1960’s. The first instructor was Mrs. Orin Johnson. Later Vera Rawlings and Lillian Irving served as instructors.

After amalgamation of the Hantsport Town School, when charges for use of space in the building became prohibitive, the group began to meet at Valerie St. Amour’s Tea Room.

In a January 1994  Hants Journal article it was reported that “Members of the Hantsport Tea Room Artists painted a mural on the windows of the Hants Community Hospital as a way to help offset the winter blues. About 20 artists were part of the group.”

Over the past month, the citizens of the town have enjoyed watching the artists work on the masterpiece, on the IGA building. There have been many comments, suggestions and changes over this period, but as the artists say, “It’s all been worth it!” 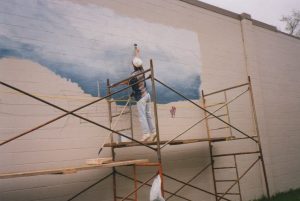 The Tea Room Artists were approached over a year ago by the Centennial Committee to undertake the task of making this great mural. Their first reaction was, “no way”. But after some persuading they changed their minds this fall, and the creation process began. 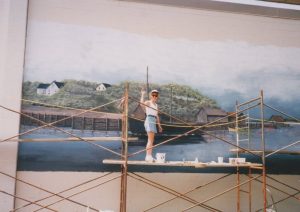 This of course started with, “what shall we paint as a mural”? A difficult question to answer, as there are so many scenes of Hantsport. But with the help of St. Clair Patterson, they decided on a scene from a postcard depicting Hantsport’s waterfront in the mid 1800’s.

The ship in the picture is the “Marlborough”. It was built in Hantsport by Elisha Fuller for E. Churchill and Sons. From the postcard, Rose Marie Stirratt made the sketch for the mural.

These Tea Room Artists started this project at the end of May, losing only one week of work to rain, and completing it on June 29th with the official signing of the mural. Most days, the artists spent 6 hours a day, and sometimes more, working on the mural. The Tea Room Artists say that this is their Centennial Project for the town.

The artists would like to recognize the special contributions to the project by St. Clair Patterson, Bob Copeland of IGA, Mr. Young of the Bank of Nova Scotia, John Cosgrove, Doug Remme and the interested citizens of Hantsport for all of their input and support.

“There’s been a lot of history lessons learned here,” says Evelyn Walsh, referring to all of the comments made on the mural. “It’s been a novel experience!” 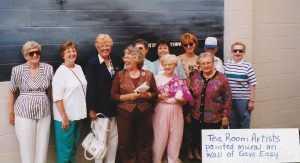 When they were asked, would you do it again? They replied, “not right away”. That’s not a yes and it’s not a no – so perhaps, in the future, we will see another mural greet one of Hantsport’s many walls ? (Just a thought. – Theresa McGinn ed.)