This article appeared in “The Hants Journal” on 9 September 1909.

We are glad to be able to present to our readers in this issue a cut of the handsome gates which now adorn the entrance of the Riverside Cemetery at Hantsport – the gift of John W. Churchill. Esq., of that town. When in Hantsport a few days ago the editor of the “Journal” saw this very handsome piece of work, which is a credit to all connected with it. The whole width is 334 feet; and the height , including the finals, 19 feet. The two main posts or columns which support the whole structure are of southern red pine, 16 inches square. 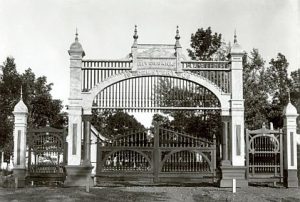 They were made from the mainmast of the brigantine Genoa, owned by E. Churchill and Sons. After the vessel was dismantled the masts lay in the salt water for years, which helped to preserve them. After being cut to the size required they were well coated at different times with creosote. When ready the posts were put in place at a depth of seven feet, and embedded in concrete to make a solid job. The main opening or carriage way is 15 feet wide, the height from the road bed to the cross bar under the main arch, 9 feet. The side gates or openings are five feet wide. the whole structure is held together with iron bars passing through the posts under the cross bars. All the turned work was done by Mr. Terry Folker of Hantsport, from patterns prepared by the builder Mr. Rod Mitchener. The domes that cap the posts were made by Mr. A. W. Pattison, from galvanized iron. All the hinges and spring catches were made by Mr. R. Comstock.

The painting is an imitation of red and gray granite with sandstone bases and the gates in bronze green; the finals and lettering are finished in gold leaf, all very neatly and tastefully done by Mr. T. M. Smith.

The whole design and its execution is most creditable to Mr. Rod Mitchener and surely Mr. Churchill deserves the warmest thanks of the community for his thoughtfulness in this caring for God‘s Acre, where rest our sacred dead, in this showing a good example worthy of imitation in many other places.

In this connection we have endeavoured to get information from some of the older residents, A correspondent writes –

“Taking in the limits of Incorporation as they are today, the land which is now the cemetery was formerly owned by two residents, Edward Barker and James Mitchner. Then there was a dividing line running through what is now the incorporated limit of Hantsport. This line ran in a south east direction to the Halfway River bank and north west to the Kings County line. Edward Barker owned
the land on the south west side as far as what is called the Holmes Hill, containing one hundred acres. James Mitchener owned the land on the north side to the Avon River bank which also contained 100 acres and which he afterwards sold to Asa Davison.

“The late Ezra Churchill purchased from Edward Barker the land which now comprises the cemetery. There was, it is said, a reservation of land for the cemetery but whether by Edward Barker or Ezra Churchill people are not certain. However no deed was given or papers to that effect. James Nunn, a shipwright bought a portion of the land from Mr. Churchill where the cemetery is located. After a time it changed hands again. Dr. E. L. Brown of Wolfville, becoming the owner, who was also Hantsport physician at that time. When the doctor examined the papers, he found that he owned the land where the cemetery is located. The people of Hantsport subscribed enough to secure the reservation, and got a deed of it from Dr. Brown, with a right of way with a road thereto and an additional piece was donated which was afterwards added to by a gift of land from Messrs.
George and J. W. Churchill.

The first burial in the cemetery was in 1834 when the remains of Ezra, son of Capt. Michael Mitchener were interred. The casket was made by Ezra Churchill. For a number of years there was not very much system as to where interments were made, persons making their choice of a spot which suited them without regard to walks or points of compass, which made it a little difficult when the decision was made to have the grounds properly laid out into lots and walks. This cemetery, with a little time spent on it each year could be made one of the prettiest burial places in the province. Charles Solomon was caretaker for a number of years, but since his death a successor has not been appointed.

Mr. J. W. Churchill has at present some men at work grading the road to and around the cemetery and removing the fence from the north side where the Churchill estate has recently given another piece of land to enlarge the cemetery grounds.