This newspaper clipping was probably published in the Windsor newspaper, October 1899. 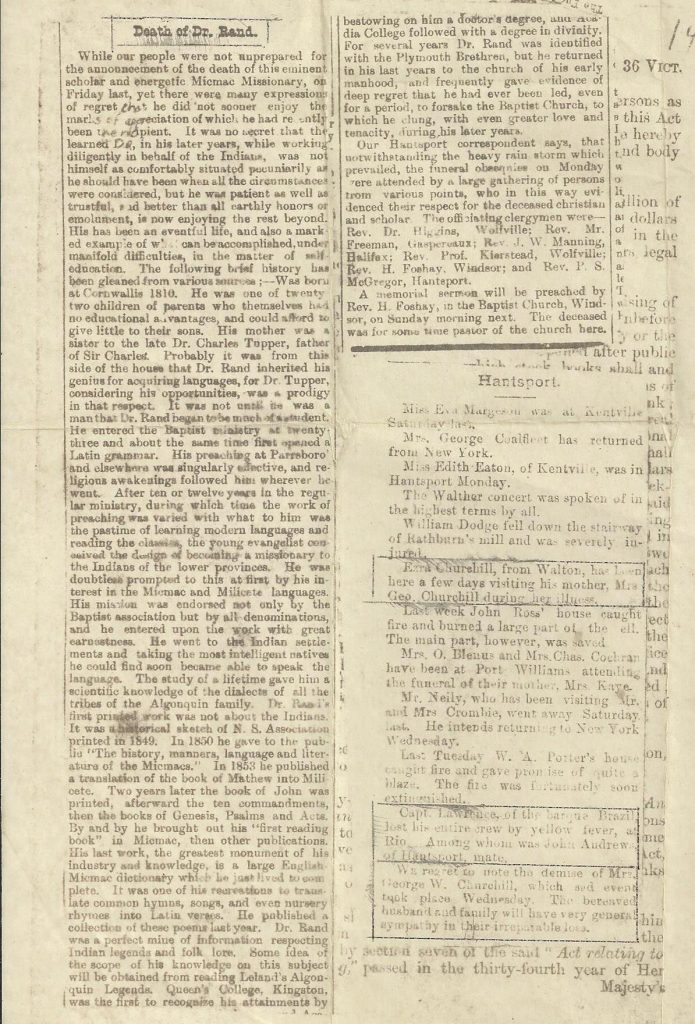 While our people were not unprepared for the announcement of the death of this eminent scholar and energetic Micmac Missionary, on Friday last, yet there were many expressions of regret that he did not sooner enjoy the marks of appreciation of which he had recently been the recipient. It was no secret that the learned Dr., in his later years, while working diligently in behalf of the Indians, was not himself as comfortably situated pecuniarily as he should have been when all the circumstances were considered, but he was patient as well as trustful, and better than all earthy honors or emoluments, is now enjoying the rest beyond. His has been an eventful life, and also a marked example of what can be accomplished, under manifold difficulties, in the matter of self-education. The following brief history has been gleaned from various sources; Was born at Cornwallis 1810. He was one of twenty two children of parents who themselves had no educational advantages, and could afford to give little to their sons. His mother was a sister to the late Dr. Charles Tupper, father of Sir Charles. Probably it was from this side of the house that Dr. Rand inherited his genius for acquiring languages, for Dr. Tupper, considering his opportunities was a prodigy in that respect. It was not until he was a man that Dr. Rand began to be much of a student. He entered the Baptist ministry at twenty-three and about the same time first opened a Latin grammar. His preaching at Parrsboro and elsewhere was singularly effective, and religious awakenings followed him wherever he went. After ten or twelve years in the regular ministry, during which time the work of preaching was varied with what to him was the pastime of learning modern languages and reading the classics, the young evangelist conceived the design of becoming a missionary to the Indians of the lower provinces. He was doubtless prompted to this as first by his interest in the Micmac and Milicete languages. His mission was endorsed not only by the Baptist association but by all denominations, and he entered upon the work with great earnestness. He went to the Indian settlements and taking the most intelligent natives he could find soon became able to speak the language. The study of a lifetime gave him a scientific knowledge of the dialects of all the tribes of the Algonquin family. Dr. Rand’s first printed work was not about the Indians. It was a historical sketch of N.S. Association printed in 1849. In 1850 he gave to the public “The history, manners, language and literature of the Micmacs.” In 1853 he published a translation of the book of Mathew into Milicete. Two years later the book of John was printed, afterward the ten commandments, then the books of Genesis, Psalms and Acts. By and by he brought out his “first reading book” in Micmac, then other publications. His last work, the greatest monument of his industry and knowledge, is a large English-Micmac dictionary which he just lived to complete. It was one of his recreations to translate common hymns, songs, and even nursery rhymes into Latin verses. He published a collection of these poems last year. Dr. Rand was a perfect mine of information respecting Indian legends and folk lore. Some idea of the scope of his knowledge on this subject will be obtained from reading Leland’s Algonquin Legends. Queens’s College, Kingston was the first to recognize his attainments by bestowing on him a doctor’s degree, and Acadia College followed with a degree in divinity. For several years Dr. Rand was identified with the Plymouth Brethren, but he returned in his last years to the church of his early manhood, and frequently gave evidence of deep regret that he had ever been led, even for a period, to forsake the Baptist Church, to which he clung, with even greater love and tenacity, during his later years.
Our Hantsport correspondent says, that notwithstanding the heavy rain storm which prevailed, the funeral obsequies on Monday were attended by a large gathering of persons from various points, who in this way evidenced their respect for the deceased christian and scholar. The officiating clergymen were – Rev. Dr. Higgins, Wolfville; Rev. Mr. Freeman, Gaspereaux; Rev. J. W. Manning, Halifax; Rev. Prof. Kierstead, Wolfville; Rev. H. Foshay, Windsor; and Rev. P. S. McGregor, Hantsport.
A memorial sermon will be preached by Rev. H. Foshay, in the Baptist Church, Windsor, on Sunday morning next. The deceased was for some time pastor of the church here.