THE MEMORIES OF AN OLD SOLDIER
PASSCHENDALE 1917 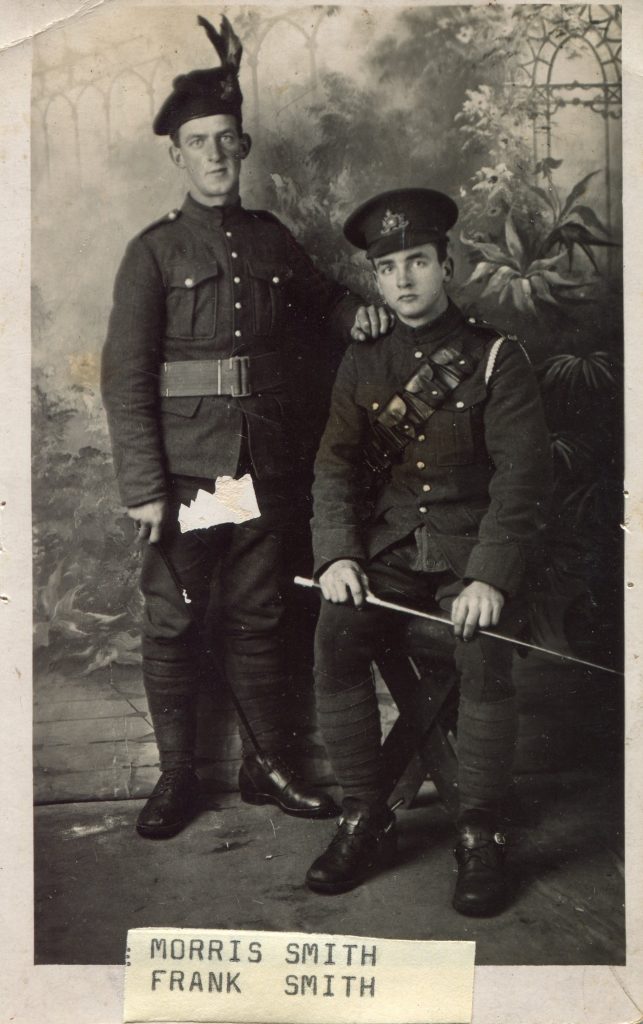 One bright sunny morning on February 16, 1916 a Group
of men, some from Kings University, Halifax, and myself were drilled
on the streets of Hantsport, N.S. for about three months. On May
31st. of the same year we were transported to the Army Camp at Alder-
shot, Kentville, N.S. for advanced training. At Aldershot we were joined
by the 193rd. Battalion, the 185th. and 219th. Battalions to form the
Nova Scotia Highland Brigade. After further Training we left the
Camp at Aldershot and proceeded to Halifax, N.S. about October 12, 1916.
At Halifax we embarked on the S.S. Olympic. This grand old ship made
many successful crossings across the Atlantic. We were tied up at
Pier 21 all night on Board Ship, and in the morning we proceeded to
the Bedford Basin where we anchored and waited for the rest of the Con-
voy. This inland Basin shaped of water was a Haven for all types of
Ships through two World Wars. It was in this piece of water which is
ten miles long and five miles wide that Ships gathered for Convoy Duty.

After our Convoy was formed we silently slipped out of
Bedford Basin through the Narrows and into Halifax Harbour. A long
line of silent Ships guarded by their ever watchful escort Ships.
After leaving Halifax Harbour our Ship’s Captains were given instruct-
ions regarding our positions in the Convoy. We were five days cross-
ing the Atlantic and without mishap, arrived in Liverpool and disem-
barked the next day for Witley Camp, Surrey. After further training
we alternately received six days Leave. After our Leave was over
we had six weeks more training, then the Brigade was broken up and I
was sent to the 42nd. Battalion, Black Watch. This Battalion was then
sent to Port of embarkation.

We arrived at LaHavre and disembarked in December. We

spent Christmas in LaHavre and on December 26th, 1916 we proceeded
to the Front in Railway Box Cars, and it was printed on the Car in
large letters, that each car would accommodate 8 horses or 40 men. We
were two days and two nights in the Box Cars before we reached the Front.
We were cold and low on rations. After dark we arrived near Arras to
a little place called Aak.

In February the 85th. Battalion arrived at Ferfay, France. This
Battalion was short a whole Platoon and they sent a Dispatch through for
a Draft of 60 men to join the 85th. Battalion. I was included with this
Draft. When we arrived at their Camp in Ferfay, their Colonel gave orders
for their Officers to line up and the Draft of Privates were to choose
the Officers to whom they would serve under. I picked out an Officer
by the name of Lieut. John Hensley who had charge of #1 Platoon. I was
in “A” Company. We were sent at night to Vimy Ridge amid shells and
mortar. We strung barb wire, built trenches for the big push on April
9th, 1917. We were in a Ravine or low ground below the Germans who were on the high Ridge above us which was Vimy Ridge. The Germans were strongly entrenched on this
Ridge. We were exposed to everything they had. Our Rations and other
Supplies had to be carried, as transportation by trucks could only go so
far. These supplies had to be moved during the night, even then the
Germans would send out Flares to light the Area up. We were trained to
stand still during that time as our bodies looked like so many trees,
even so, our Casualties were heavy.

The next day we were in our trenches, the Germans began a heavy
Barrage and around 4:00 o’clock in the early morning on the 10th. of
April “D” Company of the 85th. Battalion was rushed forward and before

night we were all in it, the whole Canadian Army, and not too far from
Lens-Arras. Patrols were placed along a long line where we had pene-
trated into the enemy lines. The Colonel and his Adjutant with six
picked men reconnoitred on the Lens-Arras Road. An uncanny stillness
was over the whole area and for all we knew we may be right on top of
the enemy, or they jumping us at any second. The Colonel and his men
were passing through the cover of a long line of trees when they were
accosted by an Officer all alone, who asked them if they knew the name
of the Area they were in. The Colonel was so amazed that he laughed out
loud, he had met his own brother. The Colonels name was Phinney, and
his home was in Halifax, N.S. It was a happy reunion. The brothers
were in different Brigades. We were very fortunate as it turned out.
There was as far as we could make out only one German gun in the vicinity,
and they seemed to be shelling over our heads at a further point. If
there had been a heavier concentration by the Germans, and if they had
known we were right under their noses we would have been completely
wiped out.

Before daybreak the next morning we were relieved by the Royal
Sussex and were brought back to Bouvigny Huts. We were all terribly
exhausted and hungry. By the 14th. we were all back in Camp. There
were many lost from our Battalion but we were proud that we had made a
name for the glorious 85th. During all the time we were in the Vimy
Operation we were under heavy fire every minute night and day. Time
and time again we were confronted with overwhelmingly opposition from
the enemy so that it seemed impossible that any of us would come out of
it alive. Comrades fell all around us but never did I see any of our
men falter. They pushed on through the bloody battle, silent, determined
men, some of them just boys and all from Nova Scotia. The 85th. made
a name for itself at Vimy. I remember of feeling very proud at the
end of the Battle for Vimy Ridge, but oh, when the roll was called how

sad we who remained were. So many of the men of the 85th. did not
answer to the roll call.

Lieut. Col. Borden, our Commanding Officer was a very
thoroughly trained Officer. He knew where all the Sections of his
Battalion was at any time. He was a great man. The Battalion owed
a lot to his Training and Discipline. Lieut. Col. E.C. Phinney was our
Second-in-Command. He was a very cool and determined man. Danger
meant nothing to him. His planning was instantaneous and our losses
would have been much heavier if it were not for the quick brain of
Lieut-Col. E.C. Phinney. He was a remarkable Officer. He was the
Officer who was in charge of our advance reconnaissance of the enemy lines.
He and his men worked under extreme machine gun, rifle and shell fire.
During this time the enemy snipers were also busy. I must mention here
another remarkable Officer we had and his name was Captain Percival
Anderson. He was from Nova Scotia too. He was in on the final
destruction of the strongly fortified enemy Post at Hill 145. He was
a very daring man, and I recall one of our men who was on patrol Duty
was badly wounded and we could hear him groaning . It was extremely
difficult to reach this man as the field where he lay was being raked
by both guns and rifles from the enemy. It was Captain Anderson who
went forward and brought this man in to a safer place. This Captain
was most successful in these frequent attempts. Many great deeds were
performed during the Battle of Vimy Ridge.

After the Battle for Vimy was over I was told that “A”
Company only had one Officer left after the fighting. He was Lieut-
Hugh Crawley. This Officer had to take over the Command of “A” Company
and he organized his men and directed them with such skill that his men
never faltered and were proud to work under him. I remember some of
our Privates did great work in reconnoitering the enemy lines. They
would set off all by themselves, and by their humour and manner

one would think they were going to a party.

Our Colonel would send out Bombing parties and they would wipe
out the Enemy Posts. The men liked the Lewis Gun. They were very
effective. How some of the men carried on under such devastating fire
is impossible to imagine. On the night of the 9th. we lost a whole
Machine Gun Crew. Only one man was left. His name was Private Gates
and he kept going for hours on hours all by himself until he was pract-
ically buried by Shells. We had a man from Dartmouth, N.S. by the name
of Manoles, he was a sniper. He would go out all by himself and reconn-
oiter the German Positions and would bring back valuable information.
A German sniper was holding up a Lewis Gun Crew. Manoles slipped out
at dark after him. It was not long when that enemy sniper was silent
and our Machine Gun Crew got to work. Manoles was a wonderful soldier,
he would go out and single handed he would clean up enemy Posts. Un-
fortunately he did not survive the War. On the night of the 9th. the
Command had to change quite often and we were rushed where we were most
needed. We advanced and gained a very hard fought position only to find
ourselves isolated. At one time we had a Corporal Reid who was a very cool and
efficient man. He held the men in this advanced position until rein-
forcements came up and the whole line then was held. Unfortunately
there were very few men left who first took the advanced Position.

We had a Lance Corporal Lindsay who was severely wounded, he
and one other man were all that was left of the Gun Crew, carried on alone
under very heavy bombardment and saved their Position. Another soldier
from a Lewis Gun Crew, he was a Private, and was the only one left of
that Gun Grew. He picked the Gun and the ammunition up and carried it
himself and helped greatly to push the enemy back. it was a real inferno.
He eventually took up a stationary position with his gun and held on all
night alone. There was no time to think of oneself. We had to hold
on knowing that most of us would be killed whether we advanced or re-

treated, and none of us to a man thought of retreating. Frequently
one Gunner alone would dispose of an entire Machine Gun Crew of the
enemy. Our Runners were very frequently victims of Snipers bullets.
They would carry on for five and six days and nights at a time with
very little rest. We fought through mud and slush. The mud in some
places was so deep that progress was very difficult. There were many
other privations but at the time we didn’t notice them. There was
no time during the Battle of Vimy Ridge to think of oneself as everything
happened too fast and too furious.