Tribute to the Valor and Worth

of Wm. Hall, Who Won the

During the early part of last month the death of Wm. Hall, a brave colored hero, who won the Victoria Cross in the Crimean War, occurred at his home in Avonport. On Sunday, Sept. 25th, a memorial service for this brave man was held in the Brooklyn Baptist Church, where a large number was present to listen to Rev. Mr. Knott’s tribute to the valor and worth of the Nova Scotian negro.

An unexpected element of sadness was added to the occasion by the death of Mary Hall, sister of the late William Hall, V.C., the pastor coming from the grave of the sister to preach the memorial sermon of the brother. Mr. Knott chose as his text, II Tim. ch. 4, verse 7, and spoke as follows:

There passed away to his rest on August 25th, 1904, a man whose history bristled with remarkable achievements and whose character and life were such that we feel it incumbent to honor his memory in this public way. William Hall was a colored man, born 78 years ago. A pickaninny, not unlike other pickaninnies; he grew to boyhood on the shores of the Avon, living in a house that stood on the site of the Bluff lighthouse. Several miles from school, and a love for the sea were agencies that prevented any educational advantages. As he watched the ships on the Basin of Minas and saw old Blomidon majestically guarding the waters, there grew into his life a yearning for the life of a sailor.

At an early age he went to sea, a rough young man to all appearance, but it was the roughness of the unpolished diamond that was soon to be brushed off. He entered the British Navy as an able seaman at the age of 24 years, and his first ship was the “Rodney” the picture of which adorns his home. In this ship he served through the Crimean War, being one of the naval brigade that did such splendid service at the siege of Sebastopol.

In the memorable year of the Indian Mutiny he was with the crew of the “Shannon” under Capt. Sir Wm. Peel elevated to the position of Captain of the foretop. At this time Delhi had fallen; the bloody massacre of Cawnporo had in part been avenged and the rebel hordes had been broken by Havelock in his march to relieve Lucknow, Havelock in turn had been surrounded and besieged and Sir Colin Campbell under whom Wm. Hall’s brigade was marching to Havelock’s relief.

On their way from Calcutta they passed through Cawnporo and said Mr. Hall: “The blood of the helpless woman was still upon the walls”. A junction was made with Havelock on the 15th of November at Alum, and on the the 16th the British troops captured the Secunderbagh and the same day Sir Colin Campbell attacked the Shah Nuliff Fort, fomerly a temple, built with large stone walls loopholed for musketry. It was enclosed in a walled avenue and strongly garrisoned with Sepoys, who kept up a murderous fire on the troops. The guns of the Shannon Brigade had no effect upon these walls, owing to the position of the building.

“I guess I will go with you” said Hall.

“You better not,” said the Captain, “it means almost certain death”

Quick came the reply: “I will take the chances, sir.”

The gun was placed in position, a detachment of soldiers covering the gun. Charge after charge was made, the bullets flew around like hail one after another of the gun’s crew were shot down until only two were left and one of these wounded. The wall was not yet down and Wm. Hall with his wounded companion, yes with his own gigantic strength brought back the gun and fired the last charge that made the wall fall, and gave an opening through which the British soldiers with a cheer rushed and won the day.

The gun was almost coated with lead from the guns of the Sepoys. The old hero longed to go through but he was ordered to stay by his gun, as he had done enough. The wall was down. The act was done that brought to Wm. Hall, that coveted distinction, the Victoria Cross.

Wm. Hall was a humble man. He said he did nothing but his duty and they all did that. His 21 years of active service was a striking illustration of duty done, and done well. The words of Admiral Nelson: “England expects every man to do his duty.” were his battle cry. Unconsiously he bore out Tennyson’s words:

“He that walks is only thirsting

For the right, and learns to deaden

Love of self, before his journey closes.

He shall find the stubborn thistle bursting

Into glossy purples, which out-redden

Not once or twice in our rough Island Story

The path of duty was the way to glory”

And so we are privileged today to render honor to this hero of many fights. After his twenty-one years of active service, he for seven years served as instructor in gunning. At the end of this service he was offered a lucrative position in White Hall Palace, which would mean to him a life of luxury. He refused, why? “I want to spend my days in the old place, the land of my birth.” He was an example in love of home and country.

He was a Baptist in belief and was wont to worship in this little church. He was one of nature’s gentleman, who had his passions well under control. He was a peaceable God-fearing citizen. He was honoured and respected by all who knew him, he was ever humble. He might have had his Victoria Cross pinned on his breast by the Queen had he wished, but he preferred to go with his ship and forgo that honor. This historic character has gone. The erect figure and the kindly eye are passed beyond our sight. Sebastopol, Balaklava, and Inkerman have known him. The blood-thirsty hordes of Sepoys within the walls at Lucknow knew his force when he played the man before the Shah Nuliff fort. He has gone from these peaceful lands beyond the sight of old Blomidon, who saw his birth and death. Gone, but not forgotten. The bugle call of the Heavenly brigade has sounded and in the muster roll of the skies another name is added. He has returned to his earth, his thoughts have perished. But happy is he for the God of Jacob was his refuge. 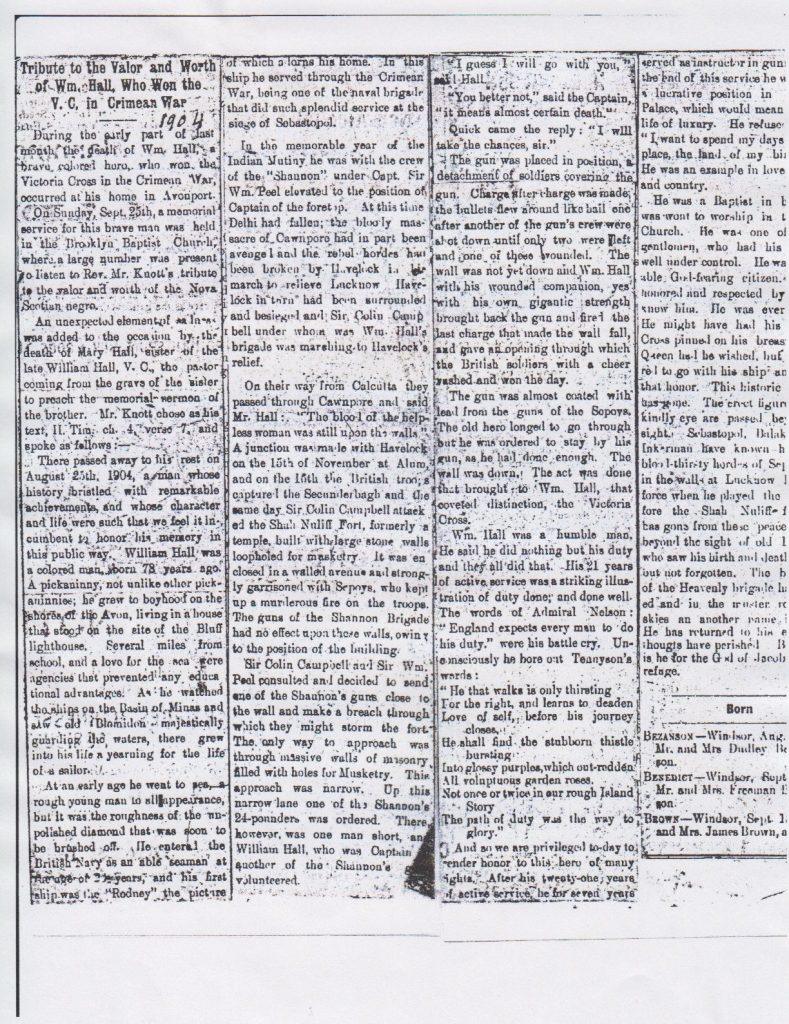