Although Riverbank Cemetery was established in 1835 it did not become the main
burying ground until 1840. Up to that time there had been burial grounds in Mt. Denson,
Lockhartville and also a couple of private burying grounds.

The ﬁrst portion of land, which is now the Riverbank Cemetery, originally
belonged to Edward Barker and James Mitchner. The late Ezra Churchill purchased this
land and as time went on the land changed hands several times. Dr. E. L. Brown of
Wolfville bought the land and found he had bought a cemetery! In 1885 the Cemetery
officially became a part of the town when the Townspeople were able to subscribe enough
money to purchase the land from Dr. Brown with a right of way and a road there to . In
1886 an additional piece of land was added as a gift from Messer’s George and J. W.
Churchill.

The first burial in the cemetery was when Ezra Mitchner,  son of Capt. Michael
Mitchner was buried there March 2, 1835 . The second burial occurred on March 12 1835,
being Lockhart Jones, Age 2. Gravestones are found dating back to the 1840’s.

At first people just picked out the lot that suited them which led to difficulties
later when walkways and compass points were being considered.

In 1908 the “new entrance gates’ to Riverbank Cemetery were presented as a gift
of John W. Churchill. The two main posts were of Southern Red Pine, made from the
main mast of the brigantine “Genoa” owned by E. Churchhill and Sons. and these were 16
ins. square. All the work was done by local residents, namely Rod Mitchner , builder;
Thomas “Tiddy” Folker, A.W. Pattison, R. Comstock and painting done by T.M. Smith. 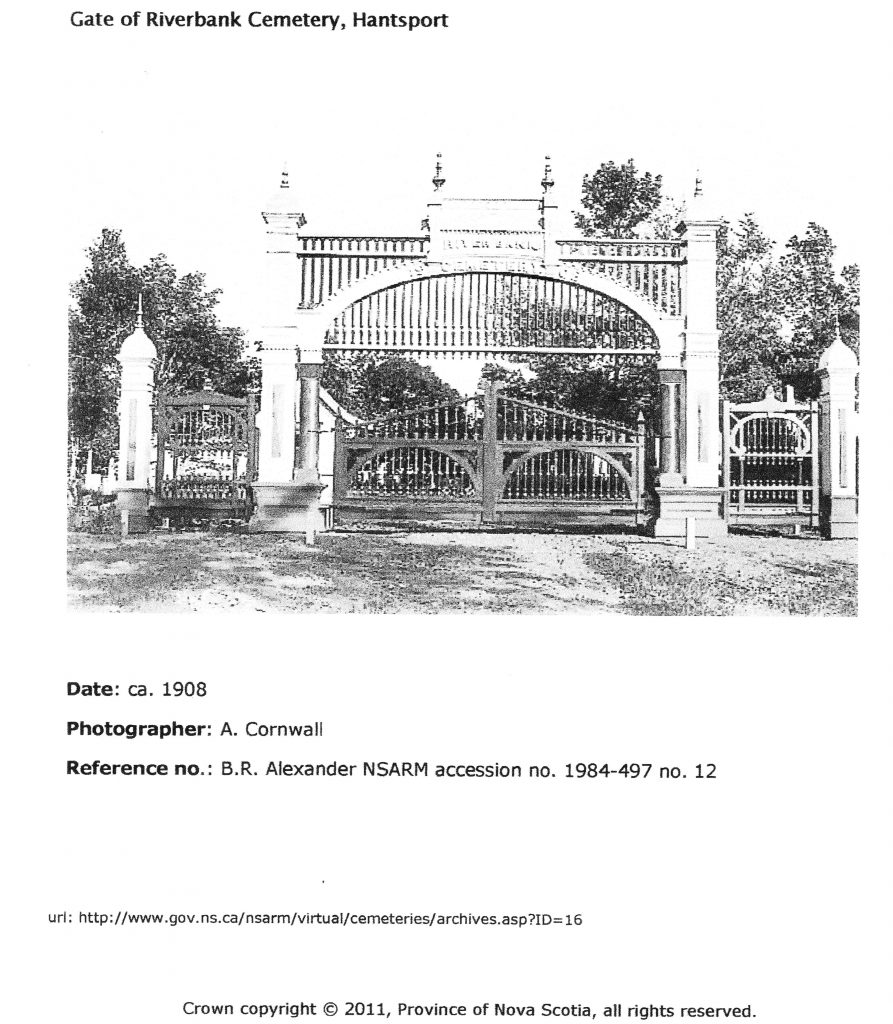 These gates were most impressive as pictures have shown. In the early 1980’s the gates
were getting the worst for wear and were removed and the present gates were erected…
During “Centennial Year 1995” a new sign was erected at the cemetery entrance from
Holmes Hill. The cemetery was again expanded by the purchase of land from Leonard
McCully in 1997 and is now known as ‘the new part”.

Through the Hantsport Historical Society with co-operation from the Town a
renewed interest in the condition of the cemetery was evidenced in 2009 and 2010 with
involvement by a group of citizens and the school children and an extensive clean-up
was carried out. The Historical Society and the Town together are continuing upkeep of
the cemetery. Benches have been added and in this past year (2010) a bridge was erected
to span the small brook that runs through the cemetery so that the new and old parts are
now connected as a walkway. This year the bridge will be dedicated to the memory of
David Hughes who was a caretaker in 2009.

66 Sea Captains and Master Mariners are buried here, showing the impact of the
Ship building days in Hantsport in years gone by.

13 people are listed as lost at sea or missing at sea.

Bernard Gregg and Nellie Prestwood both lived to 102, Daisy Fraser, Ada Haliburton
and Mary Wilcox lived till 101 and Zellah Harvie and Gladys Marsters lived to 100.

19 ministers and 7 doctors have their ﬁnal resting place here.

Prior to the introduction to the people of Nova Scotia of Social Assistance, “Free
lots” were available to impoverished citizens and 77 people are buried under this
category.

There is no record of where these people are buried , having searched the Borden
Undertaking books, and having made inquires to Leland Harvie and David States it
happens that there are no lot numbers for these folks. In conversation with Former Town
Clerk Joe McGinn and Eric Smith it appears that the “Free lots’ were on the bank below
the Stevens lot and extending along that edge of the cemetery to the southern end.

Among prominent people buried here are Rev. Silas Rand, a Missionary to the
Micmac who developed the Micmac Dictionary and wrote “Legends of the Micmac”;
Hattie Chittick, author of “Hantsport on Avon” a history of Hantsport and the large lot of
the “Churchills’ on the hillside holds the remains of the late Senator Ezra Churchill
founder of the Churchill Shipyards and other family members. The North family also
involved in the “heyday” of shipping have their lot on the other side of the “hill”.

Other people of interest are:
Over 30 Victims of the Black Fish Cholera of 1885 are supposedly buried here
Two Civil War Veterans— Dr. F. Burgess and Thomas Patten plus veterans of both World
wars.
Percy Corkum age 15 was a victim of a shooting on Cabbage Night in 1903
Frances De Silva, employee of Ezra Churchill and also a Folk Artist
Hattie Chittick, local historian of years gone by who published “Hantsport on Avon”.
Along with these people are many others who in their own way added much to the well
being of our town.

Burial records give evidence to major causes of death in years gone by—many of
which would be a rare cause today. These include the following— pneumonia,
consumption, childbirth, meningitis, cholera, diphtheria, scarlet fever, and Typhoid
Fever.

So the next time you take a stroll in our Cemetery think back to the beginnings so
many years ago and stop to think what stories can be found here in this quiet peaceful place.