Editor’s Note: The following essay appears to have been written about 1980. Author unknown. A copy was recently contributed to the Hantsport & Area Historical Society by Daryl Langille.

Francis Silver, from Portugal, came to Hantsport, Nova Scotia, while still in his teens on board one of the sailing ships belonging to the Churchill ship-yards of Hantsport. He was to spend the rest of his working life with the Senator Ezra Churchill family as their handyman and gardener. 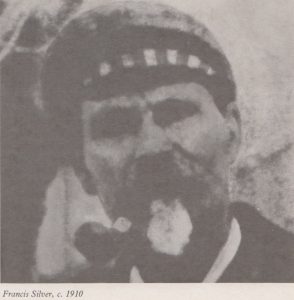 It was probably due to the fact that the Churchills were active members of the Baptist Church that encouraged Francis to become a member also, as his name is recorded on the list of church members for 1861. His name was put down as Francis Greenwood but the Greenwood has been marked out and Silver written above it. The church had been organized for thirty-one years by this time and this date 1861 marked the beginning of the third minute book. The second minute book has been missing since before 1894 when Mr. W. A. Porter published a History of the Hantsport Baptist Church as he mentions it having been “lost or destroyed”. It is unfortunate that the book was lost as it covered the years 1853-1861, just the time of Francis Silver’s arrival and his joining the church. Since we know from his tombstone that he died in 1920 at the age of eighty years we can see that in 1861 he would have been twenty-one years old.

The tombstone of Francis Silver shows on the front the double pages of an open book. On one side is written:- “Francis Silver died Aug. 9, 1920 age 80 years. Gone But Not Forgotten”. The side for his wife’s name is blank, but a long time manager of the cemetery, Mr. Maurice Smith, told me that Mrs. Silver went on a trip to the west, died and was buried there.

[Editors Note: Mrs. Elizabeth Silver went to live with her son James in Kissimmee, Florida and died there in 1931]

His marriage to Elizabeth [Arnold] , maiden name unknown [to the author at that time], was presumably in the mid-1860’s as other tombstones on his cemetery plot in Hantsport’s Riverbank Cemetery recording the deaths of four of his children indicate the first child to have been born in 1867. Another child born in 1869 lived only three months and a third child was born in 1870.

The church records show that Mrs. Silver offered herself for baptism on Feb. 22, 1873, the service being held the following day, Sunday. From that time on Mr. & Mrs. Silver were continuous and faithful members of the church. Francis was caretaker during some of that time being responsible for the workings of the gas lights. In 1887 he was on a committee to secure a pulpit supply and a proper minister. A notation in the 1890’s shows he was paid $2.90 per week as janitor. In June of 1904 the members moved a vote of thanks to him and another entry shows he was an usher.

Older residents of Hantsport remember Francis as a short, friendly old man who spoke with a heavy accent. He sometimes went to school to watch the children at their lessons. He was a man with an artistic nature as evidenced by his gardening abilities, and the little ornamental houses he built for the lawns of the Churchill home and his own home on Willow Street. One of these he gave to Mr. Patten on William Street where it could be seen on his lawn until the the late 1950’s. His own lawn was also decorated by a cement fountain on which stood a little man made of wood and a round open summer house about 8 to 10 feet in diameter topped by a cone shaped roof. Mr. Smith remembers the beautifully fashioned well buckets that Francis made.

Francis also loved to paint pictures. He decorated the inside walls of the carriage house at the Churchills, (now belonging to the Hantsport Memorial Community Centre) with full wall-sized scenes of ships and of the Churchill’s proposed moving from Hantsport. 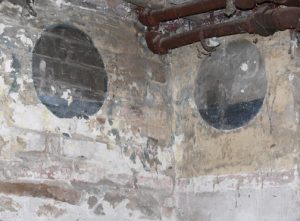 In the cellar of the Churchill House he painted a number of pictures of ships in the shape of medallions about fourteen inches in diameter on the plaster walls. In the south-west corner of the barn cellar there were others on the walls. In the upstairs of the carriage house, hanging by cords, there were numerous small paintings.

These paintings were recently brought to the attention of the Nova Scotia Art Gallery by a Hantsport native now working in Halifax, Mr. Eric Nichols. Representatives from the Art Gallery visited Hantsport to look at the paintings in the carriage house and then learned of some of the small pictures now owned by Mr. Brian Alexander. He had purchased them from the Gordon Churchill home when household articles were being sold after Mr. Churchill’s death. Mr. Alexander has now placed his pictures on loan to the Nova Scotia Art Gallery with the understanding that the Art Gallery will clean and restore their surfaces and periodically place them on display in Hantsport when a suitable place can be found.