Minas Basin Pulp & Power Company Limited
A Brief History of the Company and its People
by R. A. Jodrey

Introduction by Roy Bishop: Roy Jodrey was not one for making speeches. This is the only known text that he prepared for such an occasion. Neither the date nor the audience is indicated, although by its content and by a newspaper clipping from 1952, the speech was very likely delivered that year at the Hantsport Community Centre on the 25th anniversary of the company’s incorporation. Eleven employees with a quarter century of service were guests of honour, and were presented with gold watches. Among those present (according to the newspaper clipping) were R.A. Jodrey, D.W. Murray, F.M. Covert, J.J. Jodrey, and Judge Kenneth Crowell. 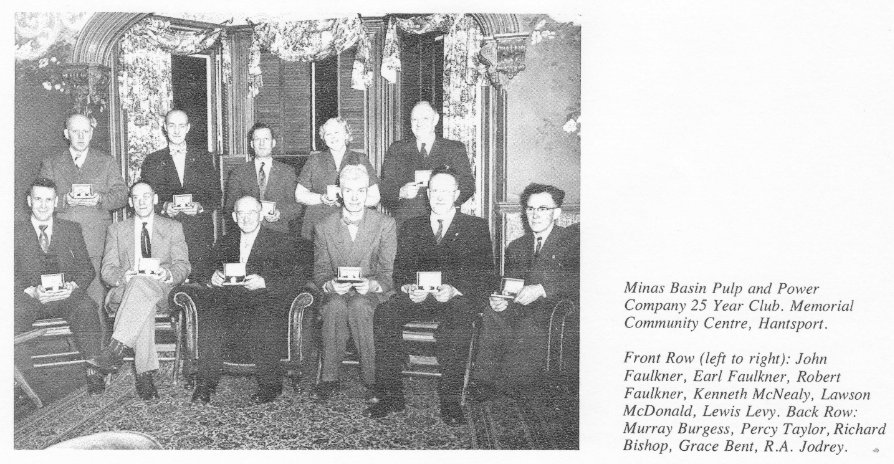 START OF COMPANY
Mrs. Bent1 and I incorporated the company in 1927. We did this, as at that time I didn’t know if it would go beyond the incorporation stages, and if it didn’t, I did not want to have any legal expenses to pay.

WHY WE LOCATED IN HANTSPORT
(1) We wanted to locate in Windsor but the Town didn’t encourage us on water supply or tax concession promises.
(2) His Worship the late L. Mortimer Wall2 gave us every encouragement, and through his work and encouragement the industry of the Minas Basin Pulp and Power Company was brought to Hantsport. Tax concessions were given to the Company and every co-operation by the Town that could be given was given, and has been continued ever since. Our tax concessions will run out shortly and I personally will be glad when they do, as now we should pay, and we want to pay our fair share of the taxes towards keeping up the Town.
(3) The late Kenneth L. Warren, our Consulting Engineer for many years, sat on the bank with me where the old goundwood mill now stands and, looking at the large Government wharf, said that it was the best proposition he had ever seen. So, it was decided then to go ahead and build a mill on the site.

These are the three reasons why our industries were started in this town.

As you know, 1929 was the year of the great stock market crash, and as the mill started to operate in February of that year we went into hard times. For several years it was just anyone’s guess whether we could keep going or not. In 1929 our President, the late Charlie Wright, was killed in a railway-car accident. This was a great loss to the Company as he was a great asset to the Company and the second largest shareholder. However, we carried on. His widow went on the Board and remained there for several years.
On the Board I have had wonderful co-operation from all, and I would like to mention several specifically who are not now on it — Chief Justice J. L. Ilsley, and the late Albert Parsons. I also want to mention particularly Mr. D. W. Murray who is now with us. He always gave us the soundest of advice and his time to the Company. He along with others put his name on a bank guarantee for $50,000 to help the company carry on, and on one occasion provided cash in amount of $5,000 without which I don’t know how the Company could have carried on. In carrying through these trying times I had help from so many I couldn’t name them, but I do want to say that Judge Crowell, whom we are glad to have with us tonight, was a great help as he helped out in many ways, financially and otherwise, and his help certainly is and has been appreciated by me.
I would like to say that without the Scott Paper connection there never would have been a pulp mill in Hantsport, and without their taking our production we couldn’t have carried on. Mr. Mateer who now is Vice President of that Company was their purchasing agent when we started doing business with them, and he has been through all the years a great friend and has had his Company help us out financially many times. There have been others in the Scott organization who have been great friends and have helped out, but he is the one I refer to particularly as my first contacts were with him.
I also want to mention another one of our Directors who has been a great help to the Company’s success, and that is Frank Covert who has been on our Board for several years. His fertile brain has helped out in many ways too numerous to mention.
I made previous mention of the hard times we went through and I want to say that the men in the mill and outside certainly co-operated. The wages paid by the company were shamefully low but if they hadn’t been low the Company would have had to fold up. However, we have carried on and at present our basic wage is $1.00 per hour3 along with fringe benefits, which I think you will all agree with me is a fair wage in a small town where living costs are much less than in larger places. We have been very fortunate in having loyal workers both inside and out, so many over the years that I couldn’t refer to them all by names, and I hope that any I may be missing will not feel slighted, as I feel we have had from all wonderful co-operation, as we have all worked for one thing, the success of the Company. The Company has been successful and is now in good financial standing and I know all want it to remain so.
One of the most important things leading to the success of the Company was the purchase and development of the St. Croix River as without cheap hydro power we couldn’t have carried on. The late W. H. Chase owned this and he sold it to the Company on very easy terms, otherwise the Company couldn’t have bought it. Even these terms couldn’t be carried out and after his passing4 his daughter Lalia and his nephew George Chase underwrote large quantities of the Company’s securities and very largely made the developments possible. (End)

2. L. Mortimer Wall, operator of Wall’s Hotel on William Street, Hantsport was mayor of Hantsport from 1925 to 1929.

The Minas Basin Pulp and Power Company Ltd. is marking more than seven decades of sustainable growth this year as it celebrates its 75th anniversary. The family-owned company was founded in 1927 in Hantsport, N.S., by the late Roy A. Jodrey.

Minas Basin is located on the site of the old Churchill Shipyard, along the banks of the Avon River, and has a work force of 219 people, many of whom are second and third generation employees.

It was a need for a new site for a pulp mill that first brought Jodrey to Hantsport in the early ’20s. He and his associates, Charles Wright and W.H.Chase, had already founded the Gaspereau company, headquartered in Windsor which generated electricity. The next venture was the Avon River Power Company which also produced ground wood into pulp for export to U.S. ports. The company had a surplus of generating capacity but no market to sell it to.

In 1925 Jodrey went to Hantsport to check available sites in hopes of establishing a pulp mill. There were many reasons why Hantsport would be an ideal location — tides and currents kept the port ice-free, the forests of five counties surrounded Hantsport and the main highway from Halifax through the Valley doubled as the town’s main street.

Another major reason for Hantsport’s selection was a tax break given the new industry by then mayor L.M. Wall.

Jodrey, Wright and T.B. Akin incorporated the company in 1927 and by June of 1928, with the mill under construction, Jodrey began selling preferred and common shares in the company.

The first pulp was ground out of the mill in February, 1929 for Scott Paper in Chester, Pa. It was soon producing 30 to 40 air-dried tonnes per day. The early years were not great ones for the company though. Power shortages shut the mill down for a month in 1929 and each year after that the shutdowns would grow longer.

The trouble really began once Jodrey sold Avon River Power to the Halifax-based Nova Scotia Light and Power Company Ltd. The public utilities board at the time forced Avon River to sell a fixed minimum of power at fixed rates to whoever would buy. All Minas Basin could afford was the company’s surplus power and as water levels sank each summer, the surplus disappeared.

Undaunted, Jodrey knew what he had to do — build a dam on the St. Croix River so he would again have his own hydroelectric generating system. But it wasn’t an easy task. He needed land he didn’t own, water rights from the government he didn’t have, as well as a fair amount of money in which he was lacking.

Jodrey enlisted the help of friends and associates and raised the money, got the land and water rights he needed and built his dam — a small (4,200 hp) development producing the cheapest power in Nova Scotia. It was a life saver for Minas Basin Pulp and Power.

The company began to thrive as did its sister company, Canadian Keyes Fibre Company, built three years earlier in 1933. That company made paper plates out of wood pulp fibres that were left over from the paper pulp process.

Although it struggled for a number of years, the Depression could not kill Minas Basin Pulp and Power Company Limited and most years it made modest profits.

By the outbreak of World War II, Minas Basin had a large orchard division and in 1947, it founded the Annapolis Valley Canners (later known as Avon Foods Ltd.) Throughout the war, Minas Basin companies were the leading exporters of lumber in Nova Scotia. In 1947-48, the company and its subsidiaries shipped nearly 40 million superficial feet of lumber to bomb-blasted Europe to erect buildings or repair and replace the devastation.

In April of 1946, Jodrey turned the sod on a new board mill that would produce a light, dry product because at that time, the company was limited to one product, a specialized pulp, and to one market, Scott Paper.

Every 400-pound bale of the pulp contained 160 pounds of water and freight rates were high. By the mid-70s the board mill was producing almost 30,000 tonnes of paperboard a year.

Today, Minas Basin produces 100 per cent recycled paperboard products such as linerboard and coreboard and has a production capacity of 100,000 metric tonnes per year.

The switch from partial to 100 per cent recyclable furnish was made in 1991, diverting about 10.8 million cubic feet of wastepaper from landfills each year. A year later, Minas Basin became the first mill in Nova Scotia, and one of the first in Canada, to be in total compliance with all federal pulp and paper effluent regulations.

Minas Basin closed its groundwood operation in 1994 and in November of 1996, the first linerboard roll rolled off ‘PM 2’, the end result of a $34 million overhaul. The move tripled the mill’s paperboard capacity.

Minas Basin’s current president and COO, Scott Travers says in this day and age of mergers, acquisitions and take overs, it’s rare to find a company that’s been in business for 75 years, and even rarer to find one under the same ownership for that long.

“It is a testament to the dedication that the present shareholders have to the original owner’s wishes,” he says. “His wishes were to realize the strength in his people and to engage in good business practices that are really good for everybody, not just the pockets of the owner. And that’s the way he was from the get-go.”