The history of the Hantsport Foundry & Machine Works Company is tied to the life and career of Joseph Alexander Mumford, machinist and inventor. Born about 1847 at Woodville, age 32 at the time of his marriage in 1879 to Ella Dodge of Wilmot Springs, Annapolis County, he described his occupation then as “Millwright”. He was the son of Charles D. Munford (a house joiner or carpenter) and Elizabeth Woolaver, the family living in the Scotch Village, Hants County census  division in 1871. Joseph then age 24 was described as a “Block Maker”.

Canadian and American patents awarded to Joseph Mumford include:

From the 1880s through to the 1890s, the Hantsport Foundry & Machine Company manufactured shingle-sawing machines. They also manufactured barrel-making machinery, and steam boilers. 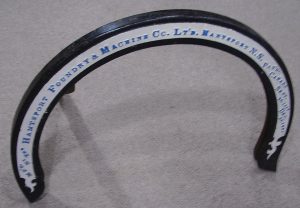 There was unfortunately competition on many fronts and the company went bankrupt.

There is one final US patent application by Joseph Mumford on behalf of Robb Engineering Co., of Amherst, Nova Scotia.

He was living in Nassau County, New York State with his only daughter, Harriette, at the time and died there on 28 March 1908 prior to the patent being awarded. There is a headstone for Joseph A. Mumford age 61 in Riverbank Cemetery, Hantsport. 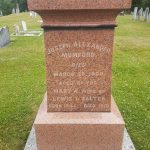 This Mill was originally bought by Elmer Hart of Port Hawkesbury, Nova Scotia where he ran the mill for several years alongside another mill in his yard.

When these mills were first made they were being used to manufacturer boards for apple crates, not shingles but board. This changed when a board came off the saw as a shingle which changed the use and purpose of these machines.

The wood is cut to a thin taper, so that one end is paper thin and the other about one to two centimeters thick making them easier to layer on top of each other.

This type of Shingle Mill is a “Swinging Arm” type. The arm can be engaged and dis-engaged from the drive to load the logs / blocks of wood, which is mainly cedar. 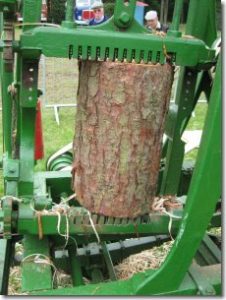 Here the arm holding the log can bee seen “swinging” across the blade and cutting the log. After each cut the swinging arm returns to the start point and the log is angled over by one / two centimetre’s to form the taper of the shingle , as explained above. You can see the toothed cogged at top of & bottom of log, as well as having opposite direction movement of the coggs it also has off-set teeth, this is because it moves the log to angled then square, to angled then square for each new cut. This in turn give you the taper on the shingle. “It is so simple, but so clever” and manufactured so many years ago. 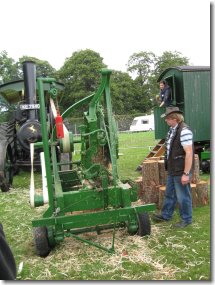 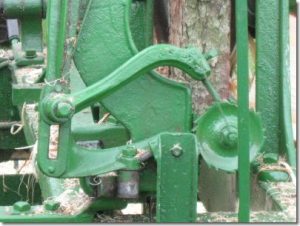 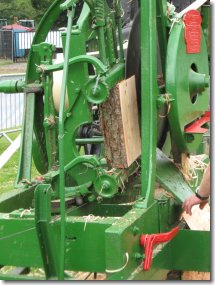 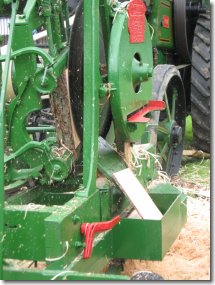 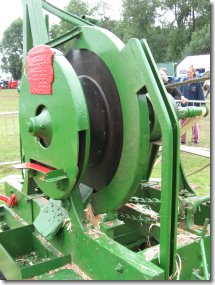 This part of the mill is called the “Jointer”. After a shingle has been sawn off the log / block of wood ,it has to be trued and squared up.
The Operator of the mill tries to position the log / block of wood, so that any knots would be close to the edge of the cut shingle, that way they can be trimmed of when he was squaring / trueing the shingles.
In the Jointer blade there are slotted holes that cut the shingle. 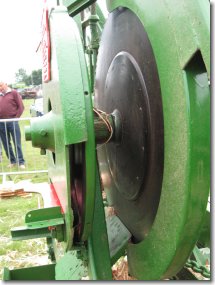 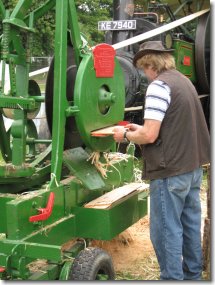 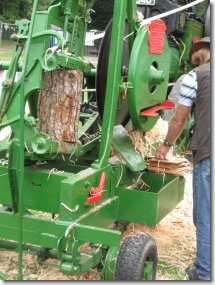 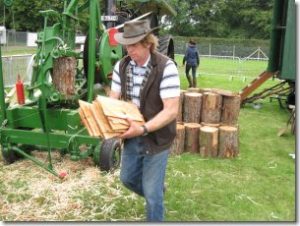 This Mumford Mill was sold to Jeff Burgess and shipped to England in 2011, Jeff can be seen in the photos above working the very rare “Shingle Mill” at the Kent County Show Heritage Section.