The Churchill House was built by Ezra Churchill in 1860 for his son John Wiley Churchill as a wedding gift. The Churchills were the owners of Hantsport’s largest shipbuilding company. Ezra and his wife Ann had 11 children, two of which were sons who both worked for their father in the ship building industry. John lived here with his wife and two daughters, Violet and Laura, until his death. The first floor of the house was restored in 1966 as a Canadian centennial project, the two rooms upstairs were done in 1978. 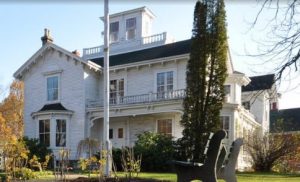 DINING ROOM – The wallcovering in the dining room is called Lincrusta. It is put on the wall warm and wet, molded, and after it dries and cools it is handpainted. This is the original wallcovering, and at the time it was installed cost $12 per roll, the equivalent of paying roughly $500 for a roll of wallpaper today. The floor is possibly the original in the dining room; it is oak and mahogany. The model of the ship (closest to the entrance) is of the Allegro, which was built in the Marshall Shipyard in Bear River in 1882. The 850 ton barque was originally called the Caswick, but after being purchased by a Norwegian company in 1905, it was renamed. The fireplace is false (note absence of chimney on the other side of the wall), and was for decorative purposes only. The molding around the ceiling was done in about 1-1/2 foot lengths, mounted, and then handpainted. This is also true for the molding in the drawing rooms.

FRONT HALL – The statue at the bottom of the staircase is of the water spirit Ondine, of Germanic mythology. Many large shipowners, builders, and sea captains kept her as a good luck piece, but it was said that if you crossed her you would die a watery death. The painting of the Lady of Shalot is actually painted directly on the wall. The poem, by Lord Alfred Tennyson, was Mr. Churchill’s favorite and he wanted it placed near the front entrance so everyone entering the house would be greeted by it and so that he would see it every day when returning from work. Local legend has it that at midnight on the night of a full moon, the oarsman begins to row and the Lady of Shalot trails her hand into the water. The wallcovering in the front hall is similar to the lincrusta in the dining room, but is called anaplicta, the difference being the number of colours used. The front doors were originally both made of Belgian stained glass, but in the 1950’s one side was broken by children playing baseball. The broken glass was replaced by a craftsman from New Brunswick, and it is not known which side is the original and which is the replacement.

SITTING ROOM/STUDY – now a display area, has pictures of the “The Cedars” grounds as the estate was then called, as well as various ships built either at the Churchill shipyards or the North shipyards. Shipping was very important to the town. The tides of the Bay of Fundy rise and fall between 50 and 60 feet in the Avon River at Hantsport.

DRAWING ROOMS – The parquet floors are not the original. The marble fireplaces and crystal chandeliers were imported from France. The mirrors were originally at the Haliburton House in Windsor, where Ezra had lived for a few years. When the house was sold, the mirrors, which are made from diamond dust, were brought here. If you look closely you can see the bits of ground diamond, especially near the edges and bottom. The small room at the back was possibly a smoking room for the men, as it was socially unacceptable at the time for the men to smoke in front of women. Note the initials J.W.C. (John Wiley Churchill) on the ceiling.

MUSIC ROOM – The oak and mahogany floor is the original. On the walls is a version of the Churchill coat of arms; each one is individually hand painted. The balcony was used for a small orchestra, the family and their guests could either dance or sit and listen below. It is also possible that the family would listen to a larger band from the balcony. At one time (c. 1933) the music room had a baby grand piano. Note the attention to detail on the doorframe – the knots in the wood are painted on, as is the wood grain on the door.

UPSTAIRS – The stairs were constructed so the long skirts worn by the ladies would flow down. The sliding doors to the balcony are made of Belgian stained glass. The door up the stairs to the left leads to a private apartment, most of which used to be the servant’s quarters. The servants would typically use the back stairs which came up from the kitchen.

VIOLET’S BEDROOM – Violet was the favored daughter, having a door to the balcony, a window area, doors to the music room balcony, as well as the only closet original to the house. (It was more common in those days to use wardrobes and chests). Note the violets painted on the ceiling.

LAURA’S BEDROOM – If Laura wanted to get on the balcony she had to crawl through the window.

UPSTAIRS HALLWAY – Photos of Francis Da Silva murals from the carriage house behind the house are displayed. The paintings were cut out of the wall in 1978 by the Art Gallery of Nova Scotia and taken to Halifax. The Incorporation of Hantsport – Ezra Churchill had been opposed to Hantsport becoming incorporated, and threatened that if council voted to pass it, he would move his company to Boston. The painting is Da Silva’s depiction of Churchill hitching up the house and taking it to Boston. In the end, town council voted to incorporate the town by a one third majority, but Churchill decided to stay, despite the increase in taxes. In 1995 Hantsport celebrated the 100th anniversary of its incorporation as a town. The lady’s sea chest was originally found in the captain’s quarters, and abandoned for several years in the basement. In 1995 it was cleaned and placed on display. The original owner is not known. The table in the corner is a “sailor’s table”, donated by Elsie Churchill-Tolson, great-granddaughter of Ezra Churchill. The table, made of red mahogany and virola pine, is carved in such a way as to allow its pieces to fit together without glue or fastenings of any kind. It was brought ashore in 1906.

WIDOW’S WALK – Be careful not to bump your head. The area at the top of the first set of stairs is designed to look like the captain’s quarters on a ship, with the low ceiling and built in chest of drawers. Wives of seafaring men would watch for ships from here. At the time the Churchill’s lived here the Avon River could be seen for miles from this point. The trees on the bank have grown so much since then that the water can barely be seen. The property was 18 acres, all of which is part of the Hantsport Memorial Community Centre today. At the time, the estate was covered with gardens, gazebos, greenhouses, and a small pond complete with an island. 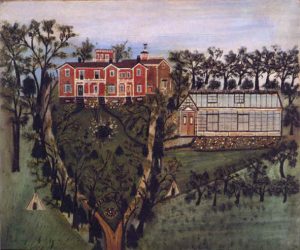 BASEMENT – Francis Da Silva was a Portuguese stowaway who came to Nova Scotia in 1861 aboard a Churchill ship. From the time of his arrival until his death in 1920, he worked for the Churchills as a sailor, gardener, coachman, and handyman. The round paintings, which are known as port-hole paintings, form a border which goes all the way around the basement. Behind the door is a painting of a ship which was probably the “rough copy” for a large mural which was painted in the barn. On the back wall is a depiction which is believed to be the Prince of Wales (later King Edward VII), to commemorate his visit to Hantsport in 1860. In the background of this mural is the elaborately decorated carriage which Mr. Churchill sent to Windsor to carry him. Da Silva did several “political cartoon” paintings on sailcloth. These were concerned mostly with reciprocity, a major trade issue in Canadian politics at the time. Ezra Churchill was elected to the Nova Scotia Assembly in 1855 and following Confederation was appointed to the Canadian Senate in 1871. Da Silva painted Churchill bicycling uphill to Ottawa from Hantsport wearing a silk hat and tail coat with the caption “This is the hardest I ever climbed”.

NURSERY – This room was originally the nursery, and after the children grew up it was converted into a chapel. At this time the alter area at the back was built on. If you look up here you can see the hidden compartments where the family’s valuables were kept, as there were no banks then. Note the nursery rhyme border painted on the walls. The painting of the nursery rhymes has not been retouched because it was in such excellent condition. The servant’s door from the kitchen is now the the first display case on the left.

In the late 1800s, Hantsport was the fifth largest shipbuilding community in the world, the largest company being E. Churchill and Sons. The Churchills built 99 ships, stopping there because the 100th ship built was supposed to be given to the Crown. At this point it is believed that the Churchills joined forces with the North shipyard down the river.