Charles Samuel (C. S.) Chesley, the founder of the Chesley Artificial Limb Company of Hantsport was born at Granville, Annapolis County, on August 18, 1871. He was the only son of Phineas Lovett Chesley and Helen Theresa Croscup. For several years he travelled in the United States and in Canada as a commercial salesman. In the Canadian West, meeting with an accident which deprived him of his right leg, he became interested in the manufacture of artificial limbs and related appliances. After years of study and experimentation he produced what became known as the “Chesley” make of artificial limbs.

“It is a great work for humanity that he is now doing in his well-equipped factory at Hantsport, and no deserving cripple is turned away from his factory door for lack of funds. Happy is the thought of being a benefit to crippled humanity, Mr. Chesley can always be found in his office or factory, one of the busiest men in the country.” 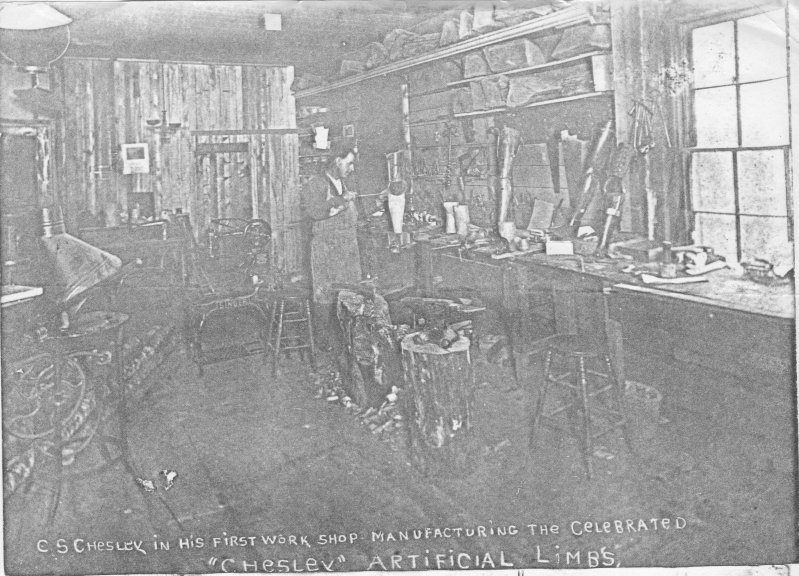 According to an advertisement in McAlpine’s Nova Scotia Directory 1914  ” My guarantee of satisfaction absolutely insures your Limb for five Years. Best of  reference from financial institutions, leading physicians and wearers. Repairs on all makes of legs promptly and efficiently done. I build the most improved and up-to-date appliances to be found in the world. My limbs are modelled on the Anatomical Lines of the patient. All kinds of elastic and non-elastic webbing stump socks and supplies of all kinds in stock. Expert fitters and makers of all kinds of deformity appliances, Splints, and Orthopedic Appliances, Obesity Belts, Abdominal Supports and Trusses. Artificial Arms and Hands a Speciality.”

To accommodate his clients Chesley operated a guest house/hotel on Main Street.

Charles Chesley was married in 1907 to Nancy Charters  of Fredericton, New Brunswick and they had one daughter, Eleanor Moore Lovett Chesley. The family can be found in the 1921 Census of Canada living on Main Street in Hantsport together with four “lodgers”. Two of the four are identified as limb makers and thus employees; Robert Paoli Veino age 28 and Bernice Grace Bennett age 26.