Did you ever wonder what happens to the collection taken at the Remembrance Day service on November 11th? Well here is the answer- it is given to the Hantsport Memorial Scholarship Foundation.

On April 30th, 1962, there were sixteen persons assembled with the Mayor, D.M Freeman acting as the Chairman of a meeting. The following list of Officers was elected at this meeting – Chairman – J. L. Harvie, Secretary – K. M. Hyson and Treasurer – A.L. Harlow. This was the beginning of the Foundation. There were fifteen names who were able to be identified and they are as follows : J.L. Harvie, D. Cuvilier, John Morse, Rev. Gordon Pyke, Merrill Hyson, A.L. Harlow, Evangeline Phillips, Carl Peach, John Folker, Jr., Donald Davison, J.A. Allard, Eugene Dukeshire, Mayor D. M. Freeman, Harold Burden and Rev. Blanchard. J.L. Harvie (John) is an active member of the Foundation still today at the age of 91. At that initial meeting there was a committee formed to draw up By-Laws with the help of the Town Solicitor. 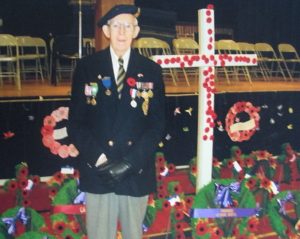 Since that time, the Foundation has met at least once yearly and has collected donations and the collection from the Remembrance Day Service. This has allowed a scholarship to be offered to a deserving student from the Hantsport area every year since Stewart Hyson received the first scholarship in 1964 in the amount of $50.00 to the latest recipient Courtney Garland in 2014. This celebrated the 50th year that a scholarship has been awarded.

The scholarship has helped toward the cost of a university or college for fifty nine (59) individuals as some years two recipients received the award. The Foundation usually meets once a year in June to consider the student applications and award the scholarship. It has been presented at the school of the deserving student(s) at their graduation. The members of the 2014 -15 Foundation are Cathy Dunbar, John Harvie, Matthew Balsor, St. Clair and Eudora Patterson, Joe Foy, Colin Chase, Peter Johnston, Marie Doucette, Peter Murray, Paul and Rebecca Price and Renda Vandertoorn.

From the financial statements it appears the first identified Remembrance Day collection was
$39.46 in 1965. In 2007 that amount had grown to $1,075.07. This collection is almost the only monies being added to the Foundation funds annually. Individuals and/or groups may make donations to the Foundation at any time through Matthew Balsor at the Avon Credit Union.

Now you know where that Remembrance Day collection goes and the opportunity those funds and other donations has afforded many Hantsport and area students in their university studies.

That went over and it’s been going on ever since. This will be twenty-nine years this year, I think, and I’ve started every one of them. Anyway, it (the Legion) went on for a number of years and I got up again and I said, “We’re not doing a thing. We should have another little project. Let’s get busy on it.”

“Well, have you got something?”

“Yes, let’s raise money for a scholarship for the town.”

“Well, how much money would you want to get?”

“My thoughts are, ten thousand dollars.” (Well, that’s a long ways away from it now, but it’s working there.)

There was a lot of opposition. I fought it, kept it going. To make it easier, I said we’d bring the town council in on it, mayor and councillors, meet them and let them subscribe, and they did and the lodges gave some. Well, now we gave $250 last year, and there, I think it’s worthwhile. It isn’t so big, but it’s worthwhile to win it. I was thinking about it today – – the girl or boy that gets it. A lot wanted to give it to some family that didn’t have the money. No, I didn’t want it that way. I wanted it for the highest marks of the student. Make it bigger that way too. Well, I had my way; it went that way and still is.

There’s an odd man in our committee, and I’m him. I come up with the last say. I would move that the student receive the scholarship and Mr. Harlow always favored me. I didn’t look at what money somebody had or what his grandfather had, I just took the honour of the pupil making the highest mark and winning it. That’s what counts, isn’t it? If they want to give another one to some underprivileged child, then I’ll go along with it. If that’s the object, then I’d be all for it. A lot didn’t agree, but they more or less do now. But we can’t give it to everyone.