William Hall was the son of freed African-American slaves from Maryland who settled in Nova Scotia after the War of 1812.

Hall was the first Black person, the first Nova Scotian and one of the first Canadians to receive the British Empire’s highest award for bravery, the Victoria Cross during the Indian Mutiny and the siege of Lucknow in August 1857.

After the Second World War the Canadian Legion branch in Hantsport was named Lucknow for the place where William Hall earned his award.

In 1945 the late J. Edward Borden, undertaker to William Hall in 1904, and Mr. Ira B. Lohnes plus Legion Members, reinterred him on the lawn of the Hantsport Baptist Church. In 1947 a memorial was built by the late E. A. Gollan of Hantsport. On Sunday, November 9th of the same year, during a heavy rain, a memorial service was held at which time the plaque on the Memorial was unveiled by Admiral Taylor.

Hall’s original Victoria Cross was repatriated from Britain in 1967 by the government of Nova Scotia and is on permanent display at the Maritime Museum of the Atlantic in Halifax. 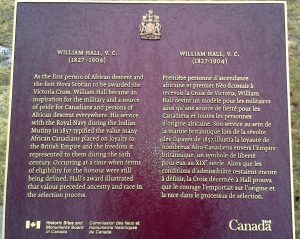 Hall was designated a National Historic Person by the Canadian Historic Sites and Monuments Board at Hantsport on 8 October 2010 and a new plaque was unveiled in his honour.

In November 2010, a connector road in Hantsport was named the William Hall V.C. Memorial Highway. A sign, bearing Hall’s likeness, was erected on the road from Highway 101 to Trunk 1 near Hantsport. 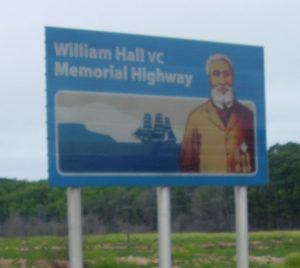 It was announced on 26 June 2015 that the fourth ship in the Royal Canadian Navy’s Harry DeWolf class would be named for William Hall. The ship will be constructed at Halifax Shipyards in Halifax.

Maritime Museum of the Atlantic