The town of Hantsport is building a new school. To properly understand the history of education in Hantsport it is necessary to take a brief glance at the story of the early settlement.

Hantsport, previously known as “the smallest town” and “the home of retired ministers of religion and retired sea captains” is now “the home of industries” and has rapidly outgrown its former size and has spread out into farm lands on three sides. Its Avon River frontage is the scene of shipping activity.

When, in 1760, the New England Planters came to the newly laid out Townships of Falmouth, Windsor, and Newport, Hantsport was part of the Township of Falmouth. It was first known as Halfway River, being halfway between Windsor and Horton. Its present name was given in 1844. It is bounded on one side, the northwest, by the Hants-Kings boundary line and on the opposite side by the Halfway River known to the Indians as Cacaquit “Swift Running Water”.

The first deed of land was dated 1783. From that date the settlement began slowly at first, with the coming of pre-Loyalists from other parts of Nova Scotia, Loyalist families from Yarmouth County, immigrants from Great Britain, and others. Barker, Lockhart, Davison, Dickie, Holmes, Lawrence,

Churchill, Trefry, Earle, Beckwith, Crowell, Faulkner, Mitchner, Toye, all historic Hantsport names, were among the first to come, and they were soon followed by the other old family names.

At first the education of the children of the pioneers, here as elsewhere in the province, was undertaken in the homes.

were established. Often they were what could be classed as (two words unreadable) schools.

Tradition says that the first school was in the home of Robert Davison on Holmes Hill. The teacher was Mrs. Randall. Later a second school, taught by Mr. DeBanner, was built near the top of the hill. It served the new community not only as a school but also as church and hall. Such a school, according to some authorities, is said to have existed as far back as 1811. It was destroyed by fire but was replaced. This latter building, after its service to education, was moved down into the centre of the town near the railroad station and became a dwelling. It can still be seen.

About 1850 a private school is said to have been in Michael Mitchner’s house and was taught by his daughter, Margaret Mitchner McCullough. Across the border at Willow Bridge into Kings County, the school section of Hants Border, there is still an old building which was once a school reported to have been kept by Mr. Kirk. The pupils have long since died, and very few who travel that way realize that it is a monument to the past. Another school was near the mouth of Tannery Road.

I have in my possession an old map, almost 100 years old. On it is marked the residence of A. Davison at the corner of present-day School and Main Streets. I believe this was the home of Asa Davison 2nd. It was later occupied by Mrs. Regina Masters and still stands as one of the oldest houses in Hantsport. Behind it, probably facing School Street, was situated a female seminary, possibly near the site of the present school.

A school house is marked on the west side of the road over Holmes Hill near the home of G. Drillio. It was across the road from the houses owned by Mrs. Hinds and E. Holmes Jr. No doubt this was the building uses as a school, church, and hall, either the first or the second built on this spot.

In those days there was no bridge across the Halfway River where the present highway bridge is situated. The railway crossed the river as it does today, but the highway went over Holmes Hill and continued on to Falmouth along that which is now known as the Bog Road. It was, as now, intersected by Rand Street. An extension of Rand Street went down by the farm, previously owned by Mr. Chesley Graham, to the river and across a bridge which was there in the old days and 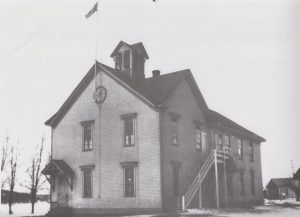 The present school was built about 1858 and has been remodeled and repaired, not only within the last quarter century but also in the past. I was told by a lady that, as a small child, she began her school days in the vestry of the Baptist Church which was used for primary classes while an enlargement was being made in the schoolhouse. The new modern school building is being erected across School Street from the present building.