On June 11 of 1896 the Congregation purchased a bell from Meneely and Co. of West Troy, New York for the sum of $89.28. The purchase included mountings and ringing ropes, also delivery to vessel in Boston, Mass., thence to Saint John, New Brunswick, thence by steamer Hiawatha. Terms of payment were 45 days and the account was settled on July 23rd, 1896. The weight of the bell is 354 pounds. The prompt settlement of this account can be appreciated in light of the fact that at the Annual Meeting the following year, the Treasurer reported that with all bills paid except insurance, cash on hand was $7.69.

The following account of the Service at which the bell was dedicated is taken from the Hants Journal of June 1896.

“On Friday evening last a service was held in St. Andrew’s Church for the purpose of dedicating the bell which has lately been hung in the tower. The exercises were conducted by Rev. Geo. Howcroft, Rector, assisted by C. R. Cummings, lay reader. The Rector in his address feelingly reviewed the work of this Congregation, complimenting them upon the success that had attended their efforts. In a little over five years they had built and furnished completely a Church of which they had good reason to be proud, they had purchased and paid for a bell, and now had the whole matter clear of debt. This object had been accomplished by a congregation that was small as regards numbers, but which was earnest and devoted in their work. He closed his address with a short review of the origin and use of bells and outlined the use that would in future be made of the bell hanging in the tower of their church.”

A bell was discovered, hidden under the main stage or platform as you will, when modifications were recently made to the heating system that consisted of a wood burning stove and a stovepipe that ran almost the length of the building to a chimney.

In order to comply with modern building and fire codes it was decided to relocate the woodstove to the back wall with an exterior chimney.

This was accomplished by cutting out a section of the platform by volunteers including Shannon Johnston.

No one knows who left the bell hidden there to be found more than a hundred years since construction of the original structure but it now hangs on a leather strap in the front foyer and is rung with pride and gratitude at regular services.

The Baptist church has a bell in the church steeple that is no longer used due to concerns about its weight and the strength of the supporting structure. The ringing rope has been removed.2019

In 1956 a Carillonic Bell system manufactured by Schulmerich Carillons Inc. of Sellersville, Pennsylvania was dedicated. 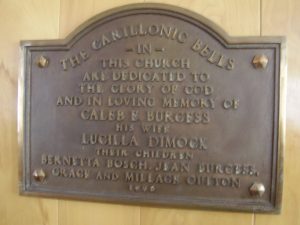 The Carillonic Bells in this church are dedicated to the glory of God and in loving memory of Caleb E. Burgess and his wife Lucilla Dimock, their children Bernetta Bosch, Jean Burgess, Grace and Millage Oulton  1956

“Eighty years ago, a young electrical engineer named George J. Schulmerich revolutionized the art of bell making. Schulmerich invented the “electro-mechanical” carillon when he discovered that tiny rods of cast bronze struck with miniature hammers produced audible and pure bell tones that could be amplified electronically to produce a rich, sonorous tone. He called his invention carillonic bells.”   –  Schulmerich Inc.

The system was programmed to chime the hour and via four very large speakers in the Baptist church steeple it could be heard all over town. In addition the system played musical selections on Sundays and special occasions. The music came from punched paper rolls loaded on an automated roll player. 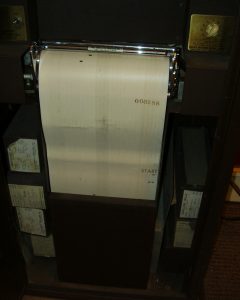 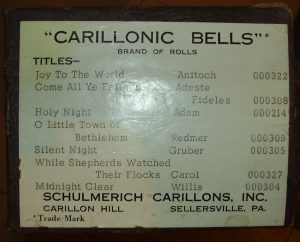 Unfortunately, the system is presently not functional due to age and the difficulty in obtaining spare parts. A small amplifier has been used to play music via the speakers in recent years.

Here is a short video of a similar device in an American museum.